Class by:
Mike Mazzalongo
This section concludes the letter by establishing faithfulness as the crowning glory in the believer's proper response to God's offer of salvation and the blessings that come with it.
Ephesians 6:10-24
August, 2012
32:09
7 minute read 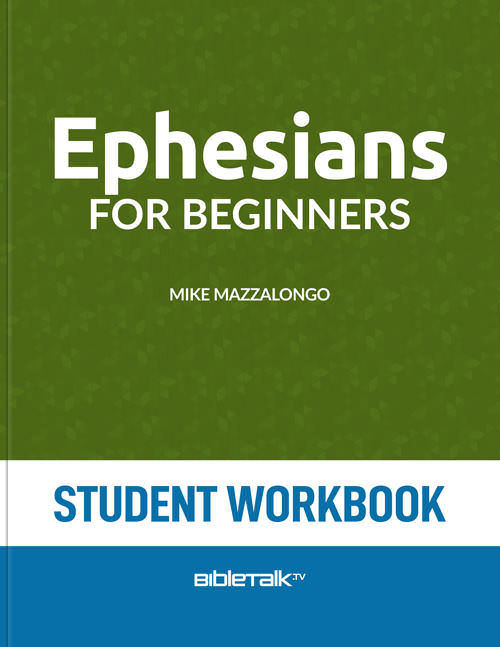 Paul describes the blessings God has prepared for the church and offers thanks to God for these. He goes on to explain that these are available for both Jews and Gentiles who come to Christ. He finishes his letter by outlining the response or obligations God seeks from the church because of these blessings. These obligations require the church to live righteously and this is seen in a loving attitude, a holy and pious lifestyle, and last of all: faithfulness, which is the subject of this concluding chapter.

The Enemy and the Battle Plan

In the final section of this letter, Paul will use the image of a Roman soldier to explain how Christians are to remain faithful. This is a departure from his style in the rest of the letter, which explains in theological and practical terms the life and responsibility of Christians. Paul finishes his letter, however, with high imagery and an enthusiastic call to arms in rallying the church to remain faithful.

The readers would have understood the imagery of "full armor" to refer to the Roman line soldier, the fully armored legionnaire with whom Rome conquered other nations. In the same way that these soldiers were fully covered, Paul says that Christians should be fully covered with God's armor. This is the strength that God provides for us. Paul also says that once covered, the Christian needs to stand firm (immovable, invincible) against the expert attack of the enemy because he is not a mere man, he is the devil himself.

Paul describes the battle as a struggle that suggests hand-to-hand combat. No long-range artillery here, everyone is on the line face to face with the enemy. No ordinary wrestling match where you lose points, but a hand to hand struggle for life and death. He goes on to give two views of the opposing spiritual army. One is of the evil rulers/powers/forces led by Satan, and the other is of a great number of wicked spirits.

The exhortation is to put on all of God's armor because human strength cannot prevail against such an enemy. In the end, the last one standing will be the victor. There will be a battle, it will be a battle to the death, you will be in that battle, and if you remain standing (faithful), you will have the victory.

He goes on to describe the seven-piece armor of the Christian warrior using the imagery of the Roman soldier getting dressed for battle. Movies have used this "preparation for battle" scene many times to show how the hero readies for the climactic final showdown with the enemy.

Stand firm therefore, having girded your loins with truth,
- Ephesians 6:14a

The basic tunic was worn by soldiers as a basic garment or covering. To cover oneself with the truth of God is basic because Satan's main weapon is the lie. Truth is the basis for courage, boldness and freedom. The enemy is rendered powerless against the truth (favorite lies: there is no God, you're not good enough).

and having put on the breastplate of righteousness,
- Ephesians 6:14b

and having shod your feet with the preparation of the gospel of peace;
- Ephesians 6:15

Soldiers wore foot coverings over their sandals that went up their shins. The key word here is "preparation." The thought is that the Christian soldier is prepared to walk into battle on account of the gospel. The gospel is the "power" of God (Romans 1:16) and it is the power that enables the Christian to do battle, to stand firm. The gospel assures the Christian of his salvation and gives him strength to face the enemy who wants to take that away.

in addition to all, taking up the shield of faith with which you will be able to extinguish all the flaming arrows of the evil one.
- Ephesians 6:16

The Roman soldier had a scutum that was a 4-foot high shield that covered him from his knees to his eyes and provided protection from arrows and other enemy projectiles. The shield of the Christian is not simply the subjective faith that says "I believe as true what the Bible says." The shield is the actual doctrine itself, the actual Word of God that responds to Satan's fiery attacks with "It is written…" This is the shield that Jesus used to defend Himself against Satan's attacks in the desert.

And take the helmet of salvation,
- Ephesians 6:17a

The soldier wore a helmet as lethal blow protection. He could survive a wound to the leg or arm but a blow to the head was rarely survivable, and so he wore protective head covering. Paul has explained from the start that God has blessed them with all the spiritual blessings that include: forgiveness for all sins, resurrection, glorification and exaltation. In this passage he compresses all of their blessings into one word: salvation. He tells them that the battle will sometimes be fierce and there may be injuries, but so long as they keep the helmet on (confidence that they possess salvation), no mortal blows will be struck.

and the sword of the Spirit, which is the word of God.
- Ephesians 6:17b

He has described defensive equipment that the soldier must possess, now he goes on to describe two offensive weapons. The Roman soldier usually carried an assortment of weapons. His most basic was the 3-foot sword (gladius) strapped to his side. Paul described the Word of God (the faith) as a defensive weapon in a previous verse referring to it as a shield. Now he changes the imagery to describe God's Word as "the sword of the Spirit" because the Holy Spirit gives us the Word (II Peter 1:21). Man's word, intelligence, will and wisdom will not do in this fight, only God's Word will do. They say you have to fight fire with fire. The same is true here. One has to fight spirit with Spirit: the evil spirits with the Spirit of God.

18With all prayer and petition pray at all times in the Spirit, and with this in view, be on the alert with all perseverance and petition for all the saints, 19and pray on my behalf, that utterance may be given to me in the opening of my mouth, to make known with boldness the mystery of the gospel, 20for which I am an ambassador in chains; that in proclaiming it I may speak boldly, as I ought to speak.
- Ephesians 6:18-20

For the soldier, the final preparation for war is mental preparation. A soldier spends many hours in briefings before going on to war games or simulated attacks. The commanders want a soldier to be mentally alert, focused, tough and motivated. If a soldier becomes careless and mentally lazy, he could be easily hurt or killed, even in war games and trial runs.

Paul exhorts the Christians at Ephesus to remain alert by keeping their minds keyed in through prayer: praying consistently, praying in the Spirit, praying for each other and praying for him (that he will also stay in the battle and do his job). The Christian stays focused and in communication with his commander through prayer.

And so, Paul encourages Christians to see themselves in a battle against spiritual forces and tells them to put on all the spiritual armor God provides. A Christian in battle does not try to engage the enemy on his own. He must use the offensive weapons of the Word and prayer to defend against the enemy, and stand firm until the enemy is defeated.

21But that you also may know about my circumstances, how I am doing, Tychicus, the beloved brother and faithful minister in the Lord, will make everything known to you. 22I have sent him to you for this very purpose, so that you may know about us, and that he may comfort your hearts.
- Ephesians 6:21-22

People learn best when taught by example and so in verses 21-22 Paul provides an example of a soldier in action. The Apostle sends Tychicus to give them a "picture" of Paul's own battle. With his description of Paul's status, Tychicus will give the brethren a vision of Paul, the great spiritual warrior, wearing the armor, using the sword and prayer while engaged at the worst front of battle, a Roman prison. In seeing that the armor works and that he is still standing firm, the Ephesians will be encouraged and comforted in their own struggle.

23Peace be to the brethren, and love with faith, from God the Father and the Lord Jesus Christ. 24Grace be with all those who love our Lord Jesus Christ with incorruptible love.
- Ephesians 6:23-24

Paul ends with a blessing. In the beginning, he offered God a prayer of thanks and praise on behalf of the brethren. In the end, the faith, peace and love come from the Father to the brethren thus completing the connection between God and His children. As Paul concludes, his prayer is that this relationship, planned before time began, will now continue after time has come to an end now that the receivers of the blessings (the church) are eternal beings like the giver of blessings, almighty God. To God be the glory in Christ through the Holy Spirit forever, Amen.

Here are some final thoughts for our application.

These are our blessings. Everything Paul talked about at the beginning is for us. We have all the blessings of heaven secured for us by God. And these are our responsibilities/obligations. The Holy Spirit, through Paul, speaks to us today about unity, righteousness and faithfulness. These things God continues to expect from us today. This is our battle. We have to be strong, remain standing and put on our armor if we are to stand firm until the end. Each one of us is on the battle line each day in the war against the evil in high places.

worth itgod's battlearmor of godfaithfaithfulbeing faithful to the endremain faithfulgod is worth it
Help keep our materials free and allow us to produce more biblical content.
Support this Ministry
Want to be notified whenever new material is added?
Subscribe by Email
This is the only time I’ve listened to a sermon and absolutely ALL of the glory goes to God. You truly are learning more about our God and His word, not about a particular church or pastor. I listen everyday and plan to continue to do so. Thank you! Thank you!