Series » Matthew for Beginners
2 of 13
Print Save for later

Class by:
Mike Mazzalongo
In this lesson we continue to examine background information about Matthew himself and a closer look at the purpose and structure of his book.
January, 2015
39:28
8 minute read 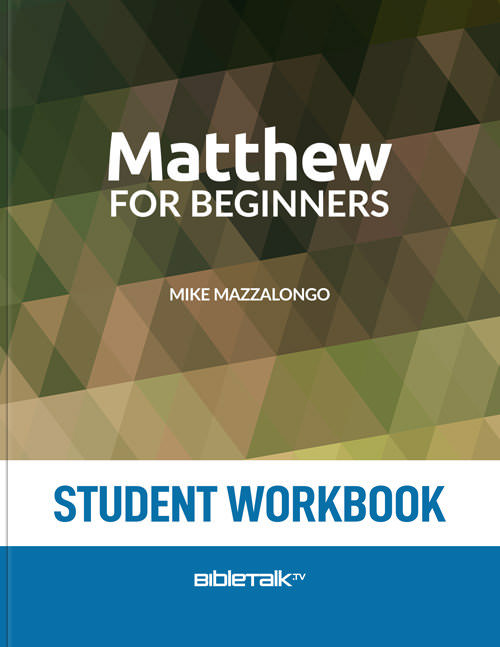 Jesus was born during the dominance of the Roman Empire. Palestine is under their control, publically ruled by a Roman appointee (Herod), maintained by Roman military under Pilate, and led in their day-to-day affairs by the wealthy Sadducee priests and their main teachers the Pharisees. The country is a hotbed of political and social turmoil straining on the leash of centuries of foreign domination, and stirred up by glorious expectations of a military/political messiah that will free them from slavery and restore them to the "golden era" of King Solomon (when they were a power in the world).

Jesus is born in Bethlehem, lived in Egypt for a while, and raised in Nazareth to a poor couple. He grows up like other boys learning a trade, learning to read the Law and attending synagogue as well as temple worship. He enters public ministry at age 30 confronting the people, the Pharisees, the Sadducees, the king and the Roman leaders with the claim that He is the Messiah and the hope of Israel (considering what they were expecting, no wonder they were surprised). At first the public welcomes Him but as the opposition of the religious leaders grows this popularity soon wanes and He is eventually tried and executed by crucifixion.

Matthew, one of his disciples, writes about His life and teachings, and we have his account of these things in what is called the gospel of Matthew.

Before we talk about Matthew himself and his recorded witness of Jesus' life, I think we should examine how and why the books of the New Testament (including Matthew's gospel) were put together.

In the early church the only written scripture used at first was the Jewish writings or Scripture now referred to as the Old Testament. Apostles used these to demonstrate that Jesus had fulfilled all the prophecies about the coming of the Jewish Messiah. These, along with their own eyewitness of Jesus' resurrection, were the proof texts used to convince their hearers that Jesus was indeed the Messiah:

22"Men of Israel, listen to these words: Jesus the Nazarene, a man attested to you by God with miracles and wonders and signs which God performed through Him in your midst, just as you yourselves know— 23this Man, delivered over by the predetermined plan and foreknowledge of God, you nailed to a cross by the hands of godless men and put Him to death. 24But God raised Him up again, putting an end to the agony of death, since it was impossible for Him to be held in its power. 25For David says of Him, 'I saw the Lord always in my presence;
For He is at my right hand, so that I will not be shaken.
26'Therefore my heart was glad and my tongue exulted; Moreover my flesh also will live in hope;
27Because You will not abandon my soul to Hades,
Nor allow Your Holy One to undergo decay.
28'You have made known to me the ways of life;
You will make me full of gladness with Your presence.'
- Acts 2:22-28

and that from childhood you have known the sacred writings which are able to give you the wisdom that leads to salvation through faith which is in Christ Jesus.
- II Timothy 3:15

With the spread of the gospel through the preaching and miraculous works of the Apostles, their own writings came to be as authoritative as the Old Testament scriptures, especially with churches that were made up of mainly Gentile (non-Jewish) converts.

The Apostles were aware of their responsibility to teach and preserve for the church the words of Christ, and the power that had been given to them in order to accomplish this.

teaching them to observe all that I commanded you; and lo, I am with you always, even to the end of the age.
- Matthew 28:20

But the Helper, the Holy Spirit, whom the Father will send in My name, He will teach you all things, and bring to your remembrance all that I said to you.
- John 14:26

In their own writings they claimed that their teaching was inspired by God.

6Yet we do speak wisdom among those who are mature; a wisdom, however, not of this age nor of the rulers of this age, who are passing away; 7but we speak God's wisdom in a mystery, the hidden wisdom which God predestined before the ages to our glory; 8the wisdom which none of the rulers of this age has understood; for if they had understood it they would not have crucified the Lord of glory; 9but just as it is written,
"Things which eye has not seen and ear has not heard,
And which have not entered the heart of man,
All that God has prepared for those who love Him."

10For to us God revealed them through the Spirit; for the Spirit searches all things, even the depths of God. 11For who among men knows the thoughts of a man except the spirit of the man which is in him? Even so the thoughts of God no one knows except the Spirit of God. 12Now we have received, not the spirit of the world, but the Spirit who is from God, so that we may know the things freely given to us by God, 13which things we also speak, not in words taught by human wisdom, but in those taught by the Spirit, combining spiritual thoughts with spiritual words.
- I Corinthians 2:6-13

15 And I will also be diligent that at any time after my departure you will be able to call these things to mind. 16 For we did not follow cleverly devised tales when we made known to you the power and coming of our Lord Jesus Christ, but we were eyewitnesses of His majesty. 17 For when He received honor and glory from God the Father, such an utterance as this was made to Him by the Majestic Glory, "This is My beloved Son with whom I am well-pleased"— 18 and we ourselves heard this utterance made from heaven when we were with Him on the holy mountain.

19 So we have the prophetic word made more sure, to which you do well to pay attention as to a lamp shining in a dark place, until the day dawns and the morning star arises in your hearts. 20 But know this first of all, that no prophecy of Scripture is a matter of one's own interpretation, 21 for no prophecy was ever made by an act of human will, but men moved by the Holy Spirit spoke from God.
- II Peter 1:15-21

14 Therefore, beloved, since you look for these things, be diligent to be found by Him in peace, spotless and blameless, 15 and regard the patience of our Lord as salvation; just as also our beloved brother Paul, according to the wisdom given him, wrote to you, 16 as also in all his letters, speaking in them of these things, in which are some things hard to understand, which the untaught and unstable distort, as they do also the rest of the Scriptures, to their own destruction.
- II Peter 3:14-16

For this reason, the apostolic writings and those authorized by the Apostles (i.e. Mark) were held as authoritative by the early church. For many years they circulated independently from church to church, and country to country. It was not felt that they should be collected into one book or canon (which means measure). Several things happened, however, that made this necessary:

The process of collecting the authentic apostolic writings that had been circulated and confirmed by the early church was slow, but in 397 AD at the Council of Carthage the 27 books of the New Testament were confirmed as the official canon. (Criteria: written by an Apostle or disciple, well circulated during lifetime, accepted by church during Apostolic Age.) There are more than four thousand full and partial copies in existence today.

For almost 1600 years we have had the same 27 books as the New Testament.

Matthew was one of Jesus' chosen Apostles; he was a tax collector who left his profitable but repugnant business to follow Jesus. His book circulated with the title "According to Matthew" and was universally accepted as an apostolic text as early as 125 AD.

One of the earliest recorded church historians, Papias (disciple of John the Apostle), writes in his book that Matthew originally wrote a Hebrew or Aramaic text which recorded Jesus' ministry and sayings (logia) in 65 and 69 AD. Why this date?

The original text was lost. What we have is a Greek translation circulated in the second century (100-200 AD).

Although the original Hebrew text was lost or destroyed, there were many reports from early first century and second century writers who claimed to have seen and used it, and they did not deny the accuracy of the Greek translation that was circulating at that time. (Irenaeus says that the authorship date was 64 AD; Pantaenus (170 AD) wrote that he found the Hebrew version of the gospel in Judea; Origin (220 AD) mentions in his writings that Matthew wrote in Hebrew for the Jews.)

Some scholars believe that in addition to the Aramaic one, Matthew also produced a version of his gospel record in the Greek language but with a Jewish style. It is in this way that scholars determined the legitimacy of this book, its apostolic authorship, and placed it into the canon.

Matthew presents a defense or apologetic work directed at the Jews. He is careful to explain events and teachings that would be difficult for the Jewish mind to understand or believe (virgin birth, death on the cross, teachings about the Sabbath, bribing of the guards to lie, procedure with the Sanhedrin, etc.). He constructs his eyewitness record using proper Jewish history and custom (genealogy, etc.), and presents his arguments based on the fulfillment of prophecy concerning the Jewish Messiah.

In the early church his gospel was often used as a training manual for young Christians. His is an orderly arrangement of the sayings and ministry of Jesus.

Matthew's gospel could be used to convert either Jew or Gentile because it contained information both could relate to and grow with, but the thrust of the material was aimed at Jews.

Matthew uses a series of narratives followed by discourses in telling Jesus' story.

There are six narrative sections and five discourse sections, each ending with the words "now when Jesus had finished saying these things." In the next chapter we will begin looking at Narrative #1.