Belief is a Must

Class by:
Mike Mazzalongo
Jesus continues His dialogue with the unbelieving crowd and emphasizes that belief is a must if they are to receive the 2 promises He makes to them.
John 6:41-59
July, 2013
36:59
9 minute read 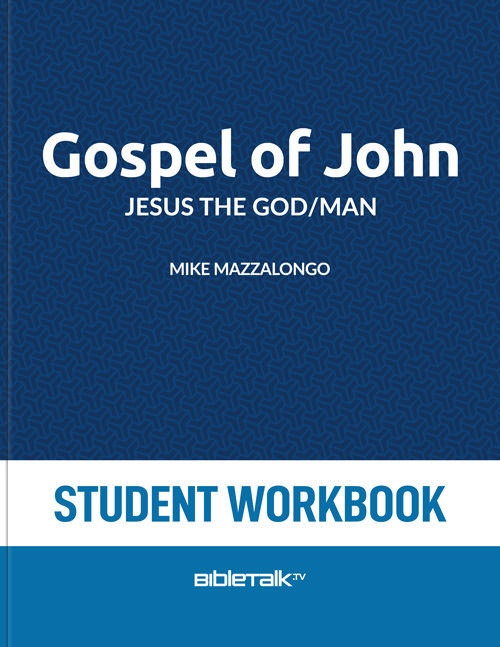 Since we are starting in the middle of a Bible chapter we need to set the scene of what has taken place so far.

This is pretty much where we left off, but this is not the end of the dialogue Jesus is having with these people at Capernaum. Jesus has made two promises to the ones who believe, but in doing so He is also stating without words something to those who persist in disbelief:

Dialogue between Jesus and the crowd (continued)

1. The crowd's reaction to His claims and promises

Vs. 41-42 – Therefore the Jews were grumbling about Him, because He said, "I am the bread that came down out of heaven." They were saying, "Is not this Jesus, the son of Joseph, whose father and mother we know? How does He now say, 'I have come down out of heaven'?"

Note that they do not talk about the promises, but finally begin to grasp what He is saying: that He comes from heaven.

Their reaction is to compare what they have seen and heard from Him to what they know about Him. They know He is a man (He never denies this) and do not want to go any further than this. Notice that they do not discuss the miracle or the promises, they simply allow their disbelief to grow into anger.

2. Jesus responds to their anger

Vs. 43 – Jesus answered and said to them, "Do not grumble among yourselves.

They have lost their focus and are now grumbling and rising in anger, they are not paying attention to Him. He gets their attention back by telling them to stop.

Vs. 44 – No one can come to Me unless the Father who sent Me draws him; and I will raise him up on the last day.

Their problem is that they are trying to figure out in a logical, physical way how Jesus came from heaven and they cannot so they are frustrated and angry about this. Jesus tells them that logic or rationalization cannot figure this thing out; you can only believe it (come to Jesus) through the method that the Father has prescribed and that is through faith. This is what He means by the Father "drawing" them.

The Father is the one who did the miracle through Jesus so that they would believe, draw near, accept Jesus and His claims. Believing does not mean you always understand "how" things are done. Believing means you accept as true the person or thing God points to through a teaching, revelation or miracle.

You do not come to Jesus by "logic," you are drawn to Him by God through His Word. Those who come in this way will receive these promises and more.

Vs. 45 – It is written in the prophets, 'And they shall all be taught of God.' Everyone who has heard and learned from the Father, comes to Me.

Jesus goes to the Scriptures themselves to convince them that what He proposes is not a new method. That being drawn by a person, believing in His word, this is nothing new. The prophets write about this. The quote He refers to is from the prophet Isaiah who was referring to God's blessings on His special people. And these people were special because they believed the Word they had been taught.

The connection is implicitly stated, but it hangs there for everyone to see. If you are the special people of this age, you would believe the words I speak because they come from God. The miracle I have done proves it.

Belief in Jesus Christ is the way to separate those who belong to God from those who do not. This causes a lot of hard feelings but this is what Jesus taught. This is offensive to other religious groups and non-religious people, but it is what Jesus Himself taught.

I can understand non-Christians having trouble with this and calling us all kinds of names because of it, this is normal. What I do not understand is Christians who falsely teach that God accepts all sincere religions! If you want to be a universalist, that is fine, but do not pervert basic Christian doctrine in the process.

Jesus taught that only His disciples were accepted by God and received eternal life, and those who rejected this hated Him for saying this. We cannot expect to be treated much differently and must not change the Lord's Word in order to be accepted by those who reject us because of our faith!

There is no one who has seen and been taught directly by God, in His holy presence. This privilege belongs to only one person, and by implication Jesus is referring to Himself. He has already said He is the one who comes from heaven.

The Lord re-summarizes His argument here by inferring that since they have not seen God, they should therefore believe the words of one who has and in so doing, demonstrate that they are truly God's people.

Vs. 47-50 – Truly, truly, I say to you, he who believes has eternal life. I am the bread of life. Your fathers ate the manna in the wilderness, and they died. This is the bread which comes down out of heaven, so that one may eat of it and not die.

In continuing His response to them He repeats the promises and claims that He has made previously:

Vs. 51 – I am the living bread that came down out of heaven; if anyone eats of this bread, he will live forever; and the bread also which I will give for the life of the world is My flesh."

Once again Jesus calls on them to believe! Before, He had asked them to believe that He was divine and from God, by using symbolic language (Bread of Life, coming down from heaven). Now He explains how the spiritual food that produces eternal life is given. One must eat the bread of heaven (it has to get inside of you). This is a symbolic way of saying, "you must take me inside of you through faith." He also explains, in veiled terms, just how He will gain life for the world. He will do this by giving His body, His life, for the world. Of course, He is referring to the cross He will die on.

At this point they cannot begin to understand the significance of what He is saying, but if they believed God's word in the prophets about a suffering savior (Isaiah 53:1-ff) redeeming God's people, they would have seen this as yet another clue as to Jesus' true identity.

For now we see that Jesus has already laid out the basic elements of the gospel message:

3. Response of the Jews

Vs. 52 – Then the Jews began to argue with one another, saying, "How can this man give us His flesh to eat?"

Remember, this is a conversation between Jesus and the people in the synagogue at Capernaum. In their response we see that they miss the spiritual significance in what He has said. They are judging everything He says from the perspective that He is only a man.

Of course, if Jesus is only a man, they are right and would be foolish to follow Him. But if the miracle is true and He is who He says He is, they are being foolish for rejecting the Son of God.

4. Jesus calls on them to convert

In this section the Lord declares openly the terms of salvation. He calls on them to decide.

Vs. 53-55 – So Jesus said to them, "Truly, truly, I say to you, unless you eat the flesh of the Son of Man and drink His blood, you have no life in yourselves. He who eats My flesh and drinks My blood has eternal life, and I will raise him up on the last day. For My flesh is true food, and My blood is true drink.

Belief in Jesus equals eternal life and resurrection. One has no life unless one does this. Jesus is emphatic about this.

Note that He does not become exasperated or discouraged by their disbelief, He merely becomes more emphatic (clearer) about the way to eternal life.

The symbolic language merely repeats the same message. You must eat my flesh and drink my blood (believe) because my flesh and blood is true food (the only way).

Vs. 56-59 – He who eats My flesh and drinks My blood abides in Me, and I in him. As the living Father sent Me, and I live because of the Father, so he who eats Me, he also will live because of Me. This is the bread which came down out of heaven; not as the fathers ate and died; he who eats this bread will live forever." These things He said in the synagogue as He taught in Capernaum.

In these verses Jesus explains the dynamics of faith and how it produces life. The one who believes in Me becomes, by virtue of faith, part of Me and I become part of him and subsequently he receives all the life that I share with the Father because I also am united to the Father.

The key here is not to try to be like Jesus by trying to understand how all of this can be so. As if Jesus was a mere human being and becoming part of Him could be explained in a physical way.

Jesus is telling them to see this as an offer for a particular relationship with God through Jesus made possible by faith. By faith, we somehow become part of Jesus the Son of God. By faith, He becomes part of us. By faith, we are changed from physical, temporal beings into eternal, spiritual beings.

The faith we are talking about is expressed in a physical way, but it itself is not physical in nature.

Later on we learn that this faith has two physical expressions practiced by all who claim to believe:

A. Baptism – It is at this point in time that through faith we become united with Jesus and He is united to us. (Romans 6:3-6; Galatians 3:26-28). Baptism is a physical act, but at that moment we know by faith that His blood washes away our sins (Acts 2:38; Acts 22:16; Revelation 1:5). There is no actual, physical cross or blood; our sins are not actually visible, but during the physical act of baptism we know that the invisible actions are taking place because we believe God's Word.

B. Communion – This is the other physical act that through faith connects us to Christ and every believer. The Word of God tells us that these spiritual, invisible things are taking place during this very visible and physical act. By faith we are united to the Lord and to the church as we practice this ceremony each Sunday.

And so by direct declaration and prophecy of things to come concerning His cross, He is trying to reveal to them the relationship between faith, salvation and ultimately the key physical acts that accompany and express these things.

We will see that even with all of this effort, the majority of His hearers were not ready to believe.

There are some very important concepts here for us to learn.

These are the basics of the Christian faith.

Reading Assignment:  John 6:60-71
john 6
Help keep our materials free and allow us to produce more biblical content.
Support this Ministry
Want to be notified whenever new material is added?
Subscribe by Email
You are encouraging me through your website and media!