Series » Titus for Beginners
2 of 3
Print Save for later

Class by:
Mike Mazzalongo
In this section, Paul provides more information concerning the qualifications necessary for church leadership and the type of challenge these men will face as leaders.
Titus 1:5-16
March, 2019
37:04
10 minute read 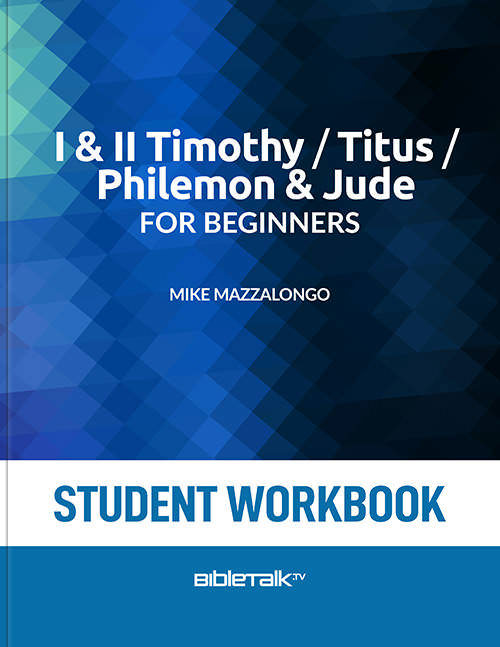 In the pastoral epistles (I & II Timothy and Titus) Paul specifically warns and equips two young preachers in how to deal with various forms of heretical teaching called Gnosticism which was circulating in many of the early churches, especially those made up of predominately Gentile converts.

Both of these groups were in error and promoted ideas that contradicted what Jesus and the Apostles taught concerning the gospel. The "good news" announced that salvation was freely offered by the grace of God and received on the basis of faith in Jesus Christ initially expressed through repentance and baptism (Acts 2:38). In his letter to Titus, Paul outlines the practical way that this preacher was to guard against both false teaching and the teachers who promoted these heresies:

Let's review our outline in order to fix the point that we are at in our study:

In the previous chapter we reviewed the salutation. In this chapter we will examine a portion of Paul's instructions concerning Titus' ministry.

Paul used Titus in various ways in the past. For example, he had sent Titus to Corinth in order to monitor this church's progress in light of specific instructions contained in the Apostle's first letter to them (II Corinthians 7:13-16). After Paul's release from his first Roman imprisonment he travelled to various places to preach (i.e. Crete), and returned to churches he had previously established to encourage their ongoing faithfulness as well as provide further instructions concerning their growth in Christ. In verse 5, Paul recalls the historical context and purpose for this letter to Titus. He had preached and begun a church in Crete but had not stayed there long enough to mature the groups that were formed. This task he left to Titus along with additional instructions contained in this present letter written and sent to the young evangelist during Paul's brief time of freedom between 62-64 AD.

Titus, therefore, was left to organize the church for worship and service. One of his tasks was to appoint elders in every city. We note that there is a considerable amount of information contained in just this one verse.

Many commentaries describe Titus as the first "bishop" of Crete and argue that as a kind of "arch-bishop" he appointed other men to leadership positions who remained under his authority in the church hierarchy:

This is what you see if you look at this passage from a Catholic or Protestant denominational view; a structure that neatly fits a preconceived notion concerning church organization. However, if we view Titus' role and authority from a strictly biblical viewpoint, allowing the New Testament to speak for and interpret itself, we see a different picture:

Once Paul stated the overall mission (to raise up elders in every city/church) he provided Titus with details regarding the type of men he needed to look for, Titus 1:6-9. There were similarities in this letter with the list of qualifications given for elders in I Timothy 3:2-7, but Paul added more details in his letter to Titus:

namely, if any man is above reproach, the husband of one wife, having children who believe, not accused of dissipation or rebellion
-Titus 1:6

A man who cannot be accused of a wrongdoing or moral failure in or out of the church.

As mentioned in the study of I Timothy where this same phrase is used: a one-woman man whose married life has been clean. A man focused only on his wife having no other improper relations with other women.

3. Having children who believe and behave (verse 6)

Not only children who have been baptized but those who conduct themselves as Christians. Rebellion = disobedience; dissipation = waste. If a man has not succeeded in forming a lasting faith in his own children, why would the church give him the responsibility for the faith and spiritual life of the church?

4. Able to be a good steward over the church (verse 7)

For the overseer must be above reproach as God's steward, not self-willed, not quick-tempered, not addicted to wine, not pugnacious, not fond of sordid gain
- Titus 1:7

Paul has mentioned the need to be unaccused in the family or society. Here he repeats this qualification and provides details on how one acquires this reputation among those in the church. He begins with negatives, what the elders should not be:

Paul then switches to positive virtues that a church leader must have and must continue to cultivate:

8but hospital, loving what is good, sensible, just, devout, self-controlled, 9holding fast the faithful word which is in accordance with the teaching, so that he will be able both to exhort in sound doctrine and to refute those who contradict.
-Titus 1:8-9

Again, not a duplicate list of what was in I Timothy but a complimentary list of qualifications that confirmed the main requirements (spiritually mature married men with faithful children).

Once Paul has outlined the qualifications to look for in men to serve as elders, he reminds Titus why the church needs these type of leaders.

10for there are many rebellious men, empty talkers and deceivers, especially those of the circumcision, 11who must be silenced because they are upsetting whole families, teaching things they should not teach for the sake of sordid gain.
- Titus 1:10-11

He describes the character, motivation and damage that false teachers were causing at the church where Titus served:

12One of themselves, a prophet of their own, said "Cretans are always liars, evil beasts, lazy gluttons." 13aThis testimony is true.
- Titus 1:12-13a

Paul quotes the Cretan (from Crete) poet Epimenides who penned these words in a hymn to the Greek god Zeus (the god of sky and thunder). It was a generally held stereotype about the Cretans which was reinforced in popular culture with this poem. (A little like generalizing about California being a liberal state or that all Canadian people knew how to play hockey.) Paul confirms this popular notion and says that the Cretans (Jewish troublemakers from Crete) prove his point and confirm the stereotype.

13bFor this reason reprove them severely so that they may be sound in the faith, 14not paying attention to Jewish myths and commandments of men who turn away from the truth.
- Titus 1:13b-14

Titus' task was to reprove them severely. In other words, Titus was to silence these false teachers spreading their lies for money, and ruining the faith and families in the process. Paul exhorts Titus to not simply appeal or bargain with these people, but silence them altogether.

In addition to this, Titus is to reprove those listening to these false ideas and jeopardizing their faith in doing so. The reproof or admonition will direct the members to stay focused on sound teaching (given to them by Paul, Titus and the elders) and avoid the useless and destructive ideas of the false teachers (myths, genealogic tables, and man-made religious ideas as opposed to revelation from God Himself).

15To the pure, all things are pure; but to those who are defiled and unbelieving, nothing is pure, but both their mind and their conscience are defiled. 16They profess to know God, but by their deeds they deny Him, being detestable and disobedient and worthless for any good deed.
- Titus 1:15-16

Here, Paul makes another reference to these greedy charlatans. To those who are pure (purified by the blood of Christ) all things are pure. Why? Because believers know how to use all that God has created. For example, food is purified through prayer; money is a tool to care for needs and the needs of others; sex is honorable and blessed within marriage, etc. To those who are unbelieving, however, nothing is pure; they eat without thanksgiving and dishonor God who feeds them. For them, money is a goal unto itself and without its connection to God, easily becomes an object of worship or idolatry. Without the context of faith, sex is devoid of its spiritual component and reduced to producing only physical gratification instead of also being a means for creating family and a facilitator for spiritual insight as it was originally conceived to be.

Paul says that because of their disbelief and misuse of spiritual tools (teachings about God) both their intellect and conscience were defiled and thus rendered these men unable to see the truth. In a final summary statement he says the following:

At this point, Paul ends the teaching section concerning Titus' responsibility to raise up and appoint qualified men who will lead the church, maintain sound teaching and deal effectively with those sowing division and discouragement in the assembly with their false teaching and unspiritual lifestyle.

In the next section the Apostle will provide Titus with both an example and pattern of the sound teaching he wants this young evangelist to maintain and pass on to the next generation.