The Reason for Paul's Letter to Timothy

By: Mike Mazzalongo
November, 2018
Mike reviews and summarizes the reasons why Paul wrote this letter, and points out the consequences that the church has, over time, suffered because it has not followed these instructions.
32 min
I Timothy 3:14-16 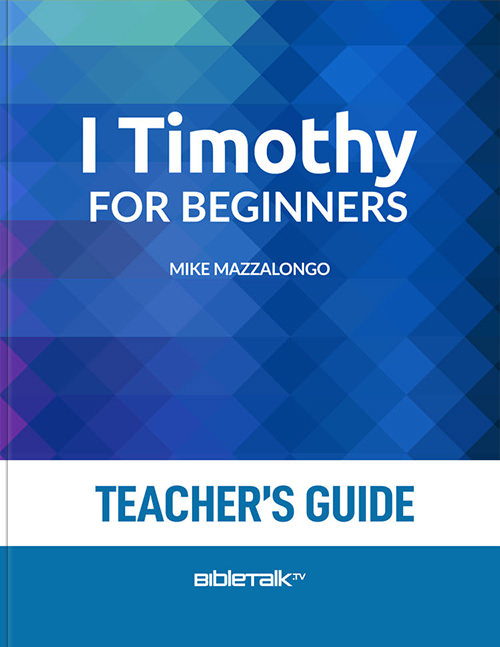 In chapter 1:3-4, Paul tells Timothy that the set purpose of his letter was to encourage the young evangelist to maintain sound doctrine and instruct others who were doing otherwise. Part of the work of a minister is to teach the Bible accurately while another part is to correct those who may be in error and consequently teaching what is incorrect. With this in mind, Paul writes to Timothy and includes the following information and teaching:

These are the verses and subjects that we have covered so far in our study.

In the last section of chapter 3:14-16, Paul himself will summarize the instructions that he has thus far given to Timothy.

I am writing these things to you, hoping to come to you before long;
- I Timothy 3:14

We have a shift here as Paul describes some of his present circumstances and plans to see Timothy in person in order to provide more in-depth teaching.

but in case I am delayed, I write so that you will know how one ought to conduct himself
- I Timothy 3:15a

In case he is delayed, however, he includes the written instructions in this letter so Timothy can handle the situation himself. Paul repeats the idea that what he writes has a specific goal: to instruct the members of the church concerning their conduct. This is the main reason for his instructions on prayer, the role of men and women, and the selection process for elders and deacons. Paul says that as Christians we have a specific way to act, to organize ourselves and relate to each other as members of the church.

in the household of God, which is the church of the living God, the pillar and support of the truth.
- I Timothy 3:15b

Note how he refers to the church:

This is a way of saying "as the church is in the habit of saying or singing," or "as I often say." The idea is that Paul may be quoting a popular hymn or psalm that was said or sung by the early church which summarized the great truths contained in the gospel message.

great is the mystery of godliness:
- I Timothy 3:16b

At first he says "truth," now he refers to this "truth" that the church is to preserve and proclaim as "the mystery of godliness." Two ways of saying the same thing. The "gospel" is the truth, is the mystery!

He who was revealed in the flesh, Was vindicated in the Spirit, Seen by angels, Proclaimed among the nations, Believed on in the world, Taken up in glory.
- I Timothy 3:16c

Here Paul either recites the hymn or summarizes its content. Either way, he lists for Timothy the main points in the hymn, the major ideas and the teaching of the gospel itself. The "truth" or "mystery of godliness" he says, can be summarized in the following way:

1. Revealed in the Flesh

And the Word became flesh, and dwelt among us, and we saw His glory, glory as of the only begotten from the Father, full of grace and truth.
- John 1:14

The Incarnation: the belief that God became man in the form of Jesus of Nazareth. This is the first and foremost teaching of the gospel and the statement all believers confess as they are baptized into Christ. Every major attack against Christianity from the first century until today, usually begins by denying this or trying to change this to something less or something different. The church is the defender and promoter of this truth.

2. Vindicated in the Spirit

who was declared the Son of God with power by the resurrection from the dead, according to the Spirit of holiness, Jesus Christ our Lord,
- Romans 1:4

Not only was Jesus' resurrection witnessed by hundreds of people here on earth, it was also witnessed by those in the spiritual realm as well.

11But Mary was standing outside the tomb weeping; and so, as she wept, she stooped and looked into the tomb; 12and she saw two angels in white sitting, one at the head and one at the feet, where the body of Jesus had been lying.
- John 20:11-12

This means that even Satan (created as an angelic being) is aware of Jesus' resurrection, as well as the angels in heaven. Both the physical and the spirit world have witnessed the resurrection of Christ.

4. Proclaimed Among the Nations

Beginning at Jerusalem and outward to all nations, the truth about Jesus has been and continues to be preached to all men (I Timothy 2:4-6). Jesus gave this instruction to His Apostles after His resurrection and, many years later, Paul says that this instruction was carried out fully.

18And Jesus came up and spoke to them, saying, "All authority has been given to Me in heaven and on earth. 19Go therefore and make disciples of all the nations, baptizing them in the name of the Father and the Son and the Holy Spirit, 20teaching them to observe all that I commanded you; and lo, I am with you always, even to the end of the age."
- Matthew 28:18-20

5. Believed on in the World

Beginning at Pentecost where three thousand were baptized, we see that the truth has continually gained believers.

40And with many other words he solemnly testified and kept on exhorting them, saying, "Be saved from this perverse generation!" 41So then, those who had received his word were baptized; and that day there were added about three thousand souls.
- Acts 2:40-41

As long as the truth is preserved and proclaimed, it will bear fruit.

6. Taken up in Glory

The ascension of Jesus into heaven.

And after He had said these things, He was lifted up while they were looking on, and a cloud received Him out of their sight.
- Acts 1:9

After completing His preaching, death on the cross, resurrection and final instructions concerning the proclamation of the gospel, Jesus is visibly taken into heaven. An actual preview of what our own transformation will be like after we are resurrected from the dead.

And so Paul finishes summarizing the "truth" or the "mystery of godliness" that the church is to uphold and promote by listing the doctrinal "highlights" of the gospel contained in a hymn or poem commonly used in the church of that era.

In the first three chapters Paul outlines four basic teachings for Timothy to receive and pass on:

Note that a majority of the problems in the "Christian" world are a direct result of violating these principles. For example:

Paul was aware that not all of his instructions would be followed so in the next chapter he will provide a series of warnings as well as godly advice to Timothy on how to deal with adversity as a minister.

Series » I Timothy for Beginners
8 of 13
Want to be notified whenever new material is added?
Subscribe by Email
Help us continue producing
more biblical content.
Support this Ministry
The last few weeks I have looked at BibleTalk.tv each morning. Thank you for helping my faith. I am encouraged to walk in the light even more through your subject matter.