The Meaning of Grace

Class by:
Mike Mazzalongo
In this final lesson from Peter's first epistle, Mike will review the last of grace's enabling features, Christian service and how Peter says that the leaders of the church should embody this virtue.
I Peter 5:1-14
January, 2016
25:52
8 minute read 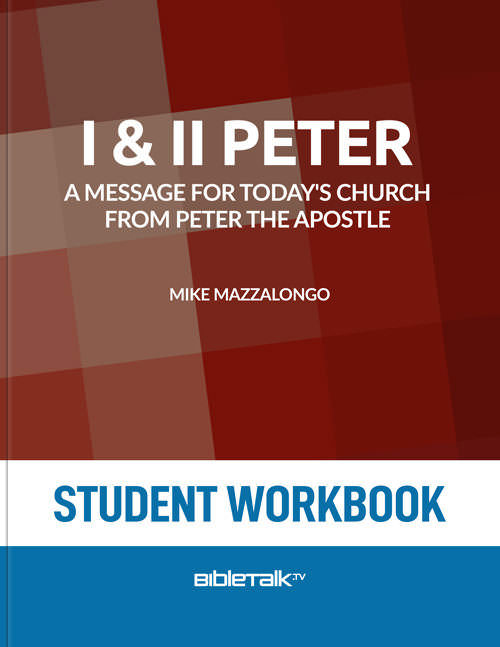 Peter understood so well the idea of grace having witnessed the grace of God in both of its contexts:

1. The grace of God seen in the person of Jesus Christ. The gracious way that God had formed the Jewish nation, in order to bring Jesus onto the earth. The love He displayed in allowing Jesus to die for our sins and then raised Him from the dead to show that He was God and had the authority to forgive sins and save man from eternal destruction.

Peter was our eye witness to all of these events that demonstrated God's grace in saving mankind.

2. Peter also understood the idea of grace from a personal perspective as he experienced the changes that God's grace worked in himself and others who believed in Jesus. His first epistle is a description and explanation of what grace means to one who has been touched by it:

In this chapter we will look at the final meaning that Peter ascribes to grace, the last thing he says that grace does to our character when it touches us.

There is an old saying that goes, "We have been saved to serve." God extends His grace to us so that we will become a channel through which His grace can reach others. Our faith and salvation find meaning and satisfaction as we begin to serve God in the work of seeking and saving others.

Peter uses elders as the ultimate example of God's grace at work in the church. A person could not aspire to a more meaningful or gracious role in God's kingdom than to serve His church as an elder.

Peter doesn't describe the work of an elder because he assumes everyone knows that an elder's role is one of complete service. Paul explains in his letters to Timothy and Titus, not only the elder's character, but the work that he has been chosen to do. This includes teaching, offering hospitality, encouraging the brethren and defending the church against false teachers and their doctrines.

1 Therefore, I exhort the elders among you, as your fellow elder and witness of the sufferings of Christ, and a partaker also of the glory that is to be revealed,

The Apostle offers this exhortation (a word of encouragement, motivation) to specific people: elders. In the New Testament, there were three words that referred to the leaders in the church. All pointed to the same person but described him in a different way.

Within the same sentence you could have all three of these words but they would be referring to the same men (e.g. elders exercising oversight in pastoring their flock).

As time went on these terms were given to different people with different levels of authority (e.g. Bishops were responsible for Pastors) and new titles as well as levels of authority were added (e.g. Archbishop, Cardinal, Pope). These were not based on the authority of Scripture and reflected the gradual falling away from the early church's practice of carefully following the Apostles' teaching on these matters.

During Peter the Apostle's ministry in the 1st century church, the terms Elder, Shepherd, Pastor, Overseer, Bishop and Presbyter were all words that described the character, authority and work of a church leader, not different types of leaders. Each congregation had more than one leader and their authority was always limited to the local congregation.

Peter counts himself among this group because aside from being an Apostle (one who had been called by Jesus and witnessed His baptism, death and resurrection), he also served as an elder in the church at Jerusalem. Based on his role as an inspired Apostle and experience as an elder, he teaches them how grace affects the service of those who lead in the church.

2a shepherd the flock of God among you, exercising oversight not under compulsion, but voluntarily, according to the will of God;

He tells them to shepherd, feed and take care of the flock because this is their primary responsibility.

The flock belongs to the shepherds and they are responsible for the direction, the feeding and protection of that flock. They have help in doing this (deacons, preachers, teachers, saints), but it is their flock and they are the ones who will answer to God for the souls won or lost, not these others. In connection with this, he also says that they are to shepherd willingly, not grudgingly. It should be a work eagerly done, not something they have to be reminded of or pressured into.

Shepherding should also be done according to God's will, and, in the next verses, he describes what that should look like.

2b and not for sordid gain, but with eagerness;

There are many reasons why some men would want to lead in the church:

Peter says that grace motivates men to become elders because they are eager to give something, not gain something.

3 nor yet as lording it over those allotted to your charge, but proving to be examples to the flock.

In the world, a promotion often means that your job is to organize and direct others to do the heavy lifting and the dirty work. In the church, becoming an elder means that a man takes on the responsibility of acting like Christ so that the others will know how Christ would act in a given situation. Elders exercise authority through teaching, encouragement and loving example, and are not to act like lords or kings.

4 And when the Chief Shepherd appears, you will receive the unfading crown of glory.

The work is demanding, but the reward is great because the elders will receive from the Supreme Shepherd the highest of honor. There is always discussion about degrees of rewards, but the book of Revelation describes the throne of God surrounded with elders first then the saints and angels.

Leaders don't lead in a vacuum. You need the proper response from the congregation in order to have a successful, spiritual leadership. Peter explains that grace also affects how the church responds to godly, gracious leadership.

5a You younger men, likewise, be subject to your elders; and all of you, clothe yourselves with humility toward one another,

The younger men are to obey their leaders. Some may have ideas, agendas, talents, etc., but grace allows the strongest of men to fold their ambitions and talents into the direction of their elders in the church.

5b for "God is opposed to the proud, but gives grace to the humble."

Peter now repeats this to the entire congregation and adds that this humble attitude should not only be directed towards the elders, but should also be the way that everyone is treated in the church.

In the following verses (6-11) he gives three reasons why all of this is necessary (that elders lead properly, that men submit, that everyone should have a humble attitude towards one another).

1. God Loves Those Who Humble Themselves

6 Therefore humble yourselves under the mighty hand of God, that He may exalt you at the proper time, 7 casting all your anxiety on Him, because He cares for you.

When leaders rely on God for strength to lead; when the church trusts God to guide them through their leaders; when everyone relies on God rather than self, God will provide all that we need. Grace enables us to humble ourselves before God, our church leaders and one another.

2. The Devil is Looking for the Proud

8 Be of sober spirit, be on the alert. Your adversary, the devil, prowls around like a roaring lion, seeking someone to devour.

Humility in leadership and in the congregation is not a curse or a punishment, it is the way to avoid the devil who continually searches to destroy Christians and finds easy targets among those who are proud.

The great favor of grace is that it enables us to temper our pride and cultivates in us the humility necessary to avoid the schemes of the evil one.

3. This Attitude will be Rewarded

9 But resist him, firm in your faith, knowing that the same experiences of suffering are being accomplished by your brethren who are in the world. 10 After you have suffered for a little while, the God of all grace, who called you to His eternal glory in Christ, will Himself perfect, confirm, strengthen and establish you.

This is not an easy thing to maintain for leaders or followers. Some Christians in Peter's day were being martyred because of their faith, and humbly accepted their death without giving up hope. The reason for this is that God Himself was perfecting, assuring, strengthening and establishing them in the kind of faith necessary to accomplish this.

Peter says that God will do the same for all those who allow the grace of God to create a humble heart in them.

11 To Him be dominion forever and ever. Amen.

At the end of his teaching, Peter finishes with an expression of praise and reverence to God as he ponders the things just said.

Letters in those days had the greeting at the end and this was no exception.

12 Through Silvanus, our faithful brother (for so I regard him), I have written to you briefly, exhorting and testifying that this is the true grace of God. Stand firm in it!

The letter was probably delivered by Silvanus, and in this verse he gives the summary or theme of his entire epistle. This is what the grace of God is all about:

Remain firm in these ideas and practices.

13 She who is in Babylon, chosen together with you, sends you greetings, and so does my son, Mark.

The church in Rome (referred to as Babylon) and his disciple, along with the one who served as secretary, Mark (the gospel of Mark) send their greetings.

14 Greet one another with a kiss of love.

A final greeting and encouragement (men kissed men, women kissed women). Peace for those who are Christians.

The connection between these two is that if grace hasn't changed your life, it hasn't saved your soul. The salvation of your soul is witnessed by the change in your life.

Reading Assignment:  II Peter 1:1-11
Help keep our materials free and allow us to produce more biblical content.
Support this Ministry
Want to be notified whenever new material is added?
Subscribe by Email
I wish to write my heartfelt thanks to you and your team for producing such wonderful teachings.  I am on my journey of getting to know more about our Lord Jesus. Though I was baptized over twenty years ago. I have just recently returned to God and begun my spiritual journey.  I wish to step up in Christian life and found that by learning Gospel John through your youtube really helping me to understand and know our Lord Jesus. May God bless you and your family.