Series » Philippians for Beginners
6 of 8
Print Save for later

Class by:
Mike Mazzalongo
This series continues with Paul explaining and comparing both the physical and spiritual circumcisions as well as the teachers who promote each of these.
Philippians 3:1-6
November, 2018
29:29
9 minute read 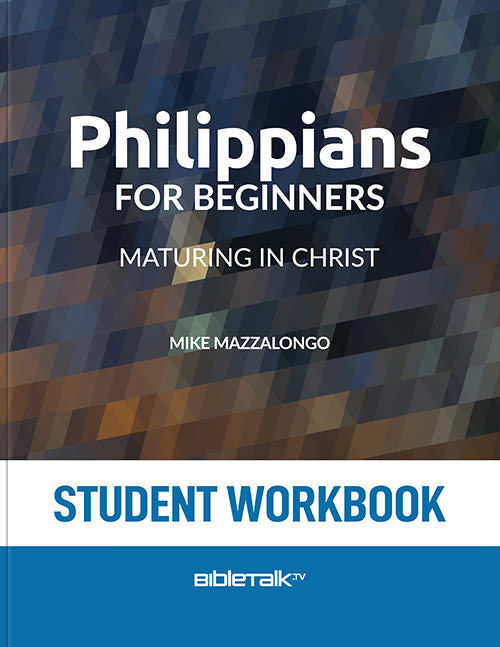 So far in this letter to the Philippian church Paul has pronounced a blessing on them, given them news regarding his personal status as he awaits trial in Rome and his plans to revisit them when he is freed from prison which he feels is imminent. In the meantime he commends them for their faithfulness and generosity, and he encourages them to pursue greater Christian maturity. He then proceeds to describe five examples of the maturity all Christians should seek after:

In this chapter we will examine the fourth example of Christian maturity, the fact that mature Christians seek righteousness by faith not by works.

1Finally, my brethren, rejoice in the Lord. To write the same things again is no trouble to me, and it is a safeguard for you.

Paul has a warning to impart but prefaces this with an exhortation to rejoice in the Lord since this should be the standard "go to" position for Christians no matter what the conditions or situation. His warning will not be about something new, it will address an ongoing concern that he has probably warned them about in the past. He assures them that he is not troubled by repeating this warning and is assured that in doing so he is guarding their souls from the errors taught by the false teachers who are creeping into the church and causing trouble. The false teachers were referred to as "Judaizers" and they promoted the idea that you had to become a Jew (by circumcision) first, before you could become a Christian and thus be saved.

Paul goes directly to the core of the matter. To refer to someone as a dog was a serious insult since, in those days, dogs were not kept as pets but wandered aimlessly, usually in packs and acted as scavengers. It was a term the Jews used to denigrate Gentiles.

The Judaizers were "workers" but their efforts and activities were evil and had a destructive result: the falling away of a believer from Christ and His salvation. The symbol of their teaching was circumcision, which they insisted was necessary for salvation. Their thinking was that Christianity was part of Judaism, therefore if a Gentile wanted to become a Christian, he had to first submit to Jewish regulations which included food laws and other requirements, but the main demand was circumcision. Circumcision was an ancient practice among the Jews, beginning with Abraham, and it signified that the individual was included in the covenant relationship between God and the Jewish people. All Jewish boys were to be circumcised eight days after birth (Luke 2:21).

Circumcision, much like animal sacrifice, was a preview or forerunner of things to come when Christ appeared. The sacrifices of the temple previewed a time when Jesus, the Lamb of God, would sacrifice Himself for the sins of all men (I John 2:2). The physical circumcision performed on the body was a sign of one's willingness to obey God and be one of His chosen people. This, however, was a preview of a time when God's people would be regenerated by God's Holy Spirit from within and be circumcised spiritually. Physical circumcision would no longer be needed for religious purposes (it continues for health purposes). Even in the Old Testament the prophets spoke of what God really wanted, "... a circumcision of the heart." (Deuteronomy 10:16; 30:6; Jeremiah 4:4). Paul told the Romans that physical circumcision no longer had any spiritual benefits.

In Colossians, Paul explains the relationship between Christian baptism and Jewish circumcision.

8See to it that no one takes you captive through philosophy and empty deception, according to the tradition of men, according to the elementary principles of the world, rather than according to Christ. 9For in Him all the fullness of Deity dwells in bodily form, 10and in Him you have been made complete, and He is the head over all rule and authority; 11and in Him you were also circumcised with a circumcision made without hands, in the removal of the body of the flesh by the circumcision of Christ; 12having been buried with Him in baptism, in which you were also raised up with Him through faith in the working of God, who raised Him from the dead.
- Colossians 2:8-12

The Colossians were also having problems with Judaizers teaching the necessity of circumcision for Gentile converts. Note that in verses 11-12 Paul explains two features of Christian baptism:

This is why physical circumcision is not required. It is inferior, it is only a preview, it does not serve to remove sin (never did), cannot regenerate the sinner (it is only relevant now for health reasons). However, faith in Christ expressed in repentance and baptism removes sin and fills the believer with the Holy Spirit. The New American Standard Bible refers to the attempt to force circumcision onto Gentile believers as a "false circumcision."

However in the original Greek, Paul referred to it as "the mutilation." This better described the unnecessary imposition of this practice on believing Gentiles who wanted to become Christians at that time.

3for we are the true circumcision, who worship in the Spirit of God and glory in Christ Jesus and put no confidence in the flesh,

Paul uses this verse to summarize and compare the Judaizers and what they are doing to himself and the Philippians as well as their status in Christ. He lists three attributes that he and the church that he planted in Philippi share. He tells them:

4although I myself might have confidence even in the flesh. If anyone else has a mind to put confidence in the flesh, I far more: 5circumcised the eighth day, of the nation of Israel, of the tribe of Benjamin, a Hebrew of Hebrews; as to the Law, a Pharisee; 6as to zeal, a persecutor of the church; as to the righteousness which is in the Law, found blameless.

Since the objective of the Judaizers was to bring the Gentiles under the Law, Paul uses himself as an example of one who was formerly under the Law, and was under the Law to a degree that neither the false teachers nor their followers could match. He lists six areas where he excelled when measured by the Law:

Paul is comparing his own credentials as one who was zealous for the Law and its application, to the Judaizers and their credentials and zeal for the Law. The implication is that in such a comparison, he is by far more pure and zealous for the Law as a Jew than they are or could ever be. This is an important point to establish before he speaks of his transformation as a Christian which we will cover in the next chapter.

Paul warns the church to be careful not to succumb to those teachers who are trying to undermine their confidence in the salvation they have received on the basis of faith by promoting a salvation based on works of the Law, the chief of which was circumcision. He reminds them of circumcision's role (as a preview of things to come) and the fact that salvation is based on faith expressed in repentance and baptism (where the true circumcision takes place - the cutting away of the body of sin by Christ) must be held on to.

In order to expose the false teaching and legitimacy of these Judaizers, Paul compares their credentials according to the Law to his own and will then demonstrate how in his life he decided to abandon these so called privileges given him by the Law for the superior gift he has received by faith in Jesus Christ.

Satan is always promoting a "better way" which is nothing new and as old as the Garden of Eden itself. Satan promised:

Satan will always be offering us a better and easier way, even to be saved. Philippians teaches us to know, understand and maintain our salvation by faith even when Satan offers us a better way.