Series » I Corinthians for Beginners
12 of 15
Bookmark Print

Class by:
Mike Mazzalongo
A lesson teaching how the various spiritual gifts are to be used in a public worship setting.
I Corinthians 14:5-40
November, 2011
39:32
10 minute read 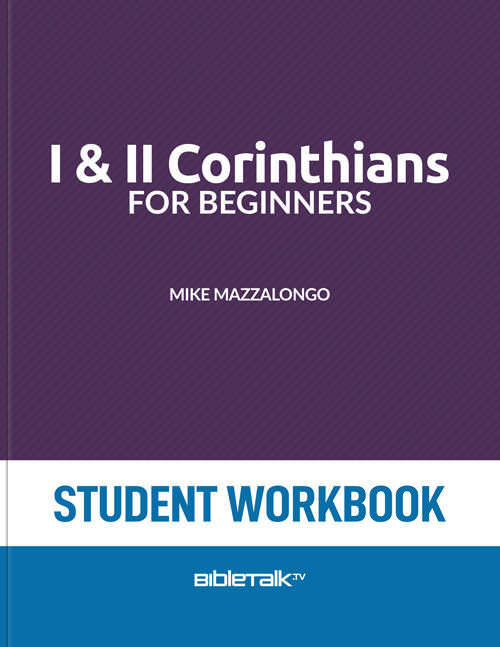 Previously we studied the opening part of this section that laid out the basic theme for the entire chapter. There are many gifts given by God, but prophecy (preaching/teaching today) is the most important because it is through this gift that God accomplishes three things necessary for the church:

This is what the church needs to remain alive and growing. I could add that in another passage Paul also says that preaching is important because it is the manner in which God calls men to be saved (I Corinthians 1:21).

The reason for this reminder was that in this congregation there existed a number of gifted men and women, and Paul had to teach them the true purpose and way to use their gifts. Some were using their gift of preaching to debate and create a following. Others were using their ability to speak in unlearned languages (tongues) to show off.

He begins, therefore, by teaching them the role of the primary gift, and from there moves on to explain the purpose and manner of usage for other gifts in the church.

The secondary theme that summarizes the second part of this chapter is found in verse 40. In public gatherings of Christians for worship the guiding principles for conduct are:

The instructions he gives in verses 6-38 are those which will guarantee propriety and orderliness in the public assembly, especially among those who are misusing and misunderstanding the gifts of prophecy and tongues.

Tongues was a gift through which the church received some form of instruction, but received it in a supernatural way (rather than simple, natural communication).

Vs. 6 – But now, brethren, if I come to you speaking in tongues, what will I profit you unless I speak to you either by way of revelation or of knowledge or of prophecy or of teaching?

What good is the foreign language (tongues) I speak unless it instructs you in some manner?

If what I am saying does not serve you in one of these ways, what profit, what good is my speech?

Vs. 7-8 – Yet even lifeless things, either flute or harp, in producing a sound, if they do not produce a distinction in the tones, how will it be known what is played on the flute or on the harp? For if the bugle produces an indistinct sound, who will prepare himself for battle?

Here Paul compares a language no one understands to different musical instruments. He says that each instrument has a distinct and recognizable sound that helps the listener identify it (i.e. the bugle is effective because its distinctive sound instructs you to prepare for battle).

Vs. 9-11 – So also you, unless you utter by the tongue speech that is clear, how will it be known what is spoken? For you will be speaking into the air. There are, perhaps, a great many kinds of languages in the world, and no kind is without meaning. If then I do not know the meaning of the language, I will be to the one who speaks like a barbarian, and the one who speaks will be a barbarian to me.

Now he demonstrates that language is the same. Each language has its own "sound" or meaning. Note that he refers to human language (verse 10).

If one understands the meaning or "sound" of that language, then that person receives instruction. However, if people do not understand each others' languages (even if they know each other) it is like speaking to a Barbarian (or a foreigner) – there is no understanding.

Vs. 12-17 – So also you, since you are zealous of spiritual gifts, seek to abound for the edification of the church. Therefore let one who speaks in a tongue pray that he may interpret. For if I pray in a tongue, my spirit prays, but my mind is unfruitful. What is the outcome then? I will pray with the spirit and I will pray with the mind also; I will sing with the spirit and I will sing with the mind also. Otherwise if you bless in the spirit only, how will the one who fills the place of the ungifted say the "Amen" at your giving of thanks, since he does not know what you are saying? For you are giving thanks well enough, but the other person is not edified.

He tells them not to be selfish, their gift needed to edify (or serve) the entire church not just themselves. If they spoke in a tongue that no one (including themselves) understood, they might feel good inwardly that they were doing something special, but no one else was being served by it.

Paul encourages them to seek the complimentary gift of interpretation so that everyone could be blessed by the gift.

Vs. 18-19 – I thank God, I speak in tongues more than you all; however, in the church I desire to speak five words with my mind so that I may instruct others also, rather than ten thousand words in a tongue.

Paul acknowledges that he possesses the gift of tongues more than they but if there are no interpreters for his tongues, he'd rather speak in their own language so they could understand what he was saying.

So the first purpose for this gift was to provide instruction and to do it in a miraculous way – not just to show off.

It was a gift that provided a sign to unbelievers that what was being said was from God.

Vs. 20-22 – Brethren, do not be children in your thinking; yet in evil be infants, but in your thinking be mature. In the Law it is written, "by men of strange tongues and by the lips of strangers I will speak to this people, and even so they will not listen to me," say the Lord. So then tongues are for a sign, not to those who believe but to unbelievers; but prophecy is for a sign, not to unbelievers but to those who believe.

Paul explains that this miracle was prophesied long ago in connection with the coming of the gospel. It would be a signal that the gospel was being preached. We know that the Apostles were the first to demonstrate it at Pentecost (Acts 2:1-42).

This also explained why this gift faded. It was given as a sign that the promise of the Old Testament had finally arrived. It was a gift more significant to the Jews than the Gentiles since it referred to Old Testament prophecy.

Vs. 23-25 – Therefore if the whole church assembles together and all speak in tongues, and ungifted men or unbelievers enter, will they not say that you are mad? But if all prophesy, and an unbeliever or an ungifted man enters, he is convicted by all, he is called to account by all; the secrets of his heart are disclosed; and so he will fall on his face and worship God, declaring that God is certainly among you.

Paul creates a scenario where an unbeliever (and one without miraculous gifts) enters a church where all speak tongues but there are no interpreters. In a case like this the unbeliever would not understand, and probably think everyone was crazy because of the confusion. But, if everyone prophesied in a language understood, this would convict and convert the unbeliever.

Having explained the true purposes for the gifts (tongues/interpretation), Paul now goes on to explain how orderly worship should be conducted.

Vs. 26 – What is the outcome then, brethren? When you assemble, each one has a psalm, has a teaching, has a revelation, has a tongue, has an interpretation. Let all things be done for edification.

Make sure that you are using your gift for the right purpose: to bless and build up the assembly.

Vs. 27-35 – If anyone speaks in a tongue, it should be by two or at the most three, and each in turn, and one must interpret; but if there is no interpreter, he must keep silent in the church; and let him speak to himself and to God. Let two or three prophets speak, and let the others pass judgment. But if a revelation is made to another who is seated, the first one must keep silent. For you can all prophesy one by one, so that all may learn and all may be exhorted; and the spirits of prophets are subject to prophets; for God is not a God of confusion but of peace, as in all the churches of the saints. The women are to keep silent in the churches; for they are not permitted to speak, but are to subject themselves, just as the Law also says. If they desire to learn anything, let them ask their own husbands at home; for it is improper for a woman to speak in church.

Some basic rules of order in public worship:

Vs. 36-38 – Was it from you that the word of God first went forth? Or has it come to you only? If anyone thinks he is a prophet or spiritual, let him recognize that the things which I write to you are the Lord's commandment. But if anyone does not recognize this, he is not recognized.

Paul anticipates protest over the things he has just instructed, and reminds them of the source of his own authority in these matters: the Lord Himself.

These instructions are not merely suggestions, they are commandments from the Lord. If one ignores these in worship then the worship is ignored by God. (I Timothy 2:11-15 – eternal vs. cultural basis for teaching.)

Vs. 39-40 – Therefore, my brethren, desire earnestly to prophesy, and do not forbid to speak in tongues. But all things must be done properly and in an orderly manner.

We do not possess the miraculous gifts of tongues, interpretation, inspired prophecy, discernment or revelation today. However, we can still accomplish the same goals that these gifts helped the early church to achieve.

Today we have the word of God revealed and recorded in the Bible. We also have preachers, teachers, elders, deacons and saints who through the ministry of this word:

And He gave some as apostles, some as prophets, and some as evangelists and teachers for the equipping of the saints for the work of service, to the building up of the body of Christ.
- Ephesians 4:12

Every scripture is inspired by God and profitable for teaching, reproof, for correction and training in righteousness so the man of God may be adequate, equipped for every good work.
- II Timothy 3:16

Comfort each other with these words.
- I Thessalonians 4:18

I am not ashamed…these things not done by miracles but by preaching the word.
- Romans 1:16

The miraculous gifts are gone but in their place we have the word of God that empowers us to accomplish the very same objectives. And today we also have the same responsibility to conduct our assemblies in an orderly and decent fashion.

We do this with reverent behavior and modest dress (not just sexual concept of dressing but respectful dressing).

We do this by following Paul's instructions.

We do all of this how? Through miracles? No. Through the preaching and teaching of God's word.

Reading Assignment:  I Corinthians 16:1-24
worshiping godworshipping our lordtonguesspeaking in tonguespentecostalsorderly worship
Help keep our materials free and allow us to produce more biblical content.
Support this Ministry
Want to be notified whenever new material is added?
Subscribe by Email
We are a small congregation with no full-time minister. We have depended on video material from BibleTalk.tv for quality scriptural lessons that would have otherwise been unavailable to us. While we do supplement this with visiting preachers, Mike's work has been the cornerstone of our Sunday morning sermons.