Class by:
Mike Mazzalongo
This lesson examines what the writer of Hebrews says about the 4th element of the Jewish religion, the priesthood, and especially the High Priest.
Hebrews 4:14-5:10
November, 2015
41:41
11 minute read 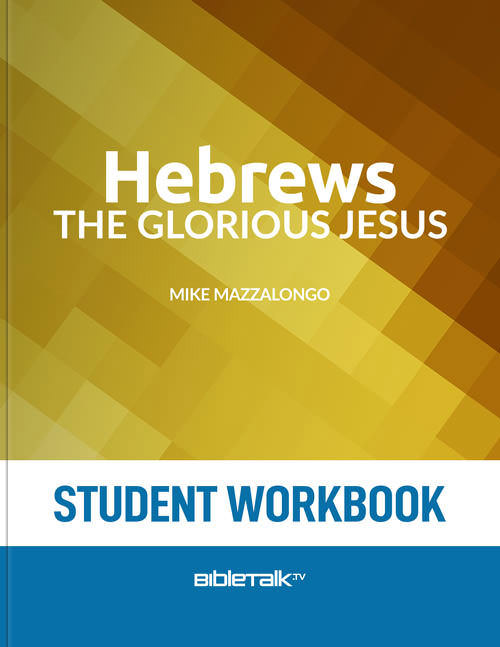 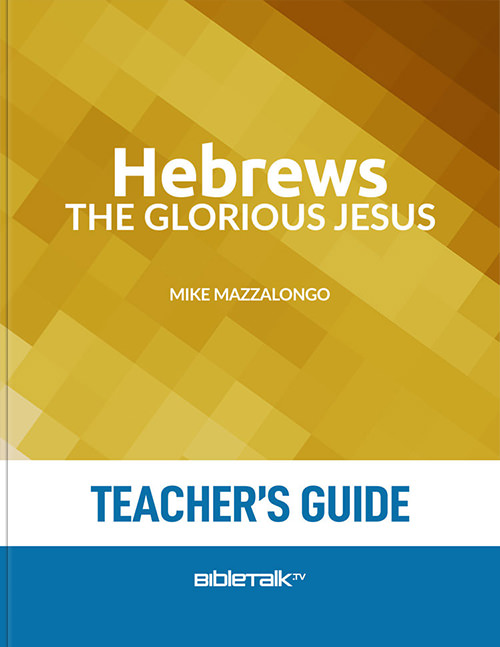 In his argument encouraging Jewish Christians to remain faithful to Christ, the author of the book of Hebrews divides his letter into two sections:

In this chapter we will examine what he says about the fourth part of the Jewish religion: the priesthood and, especially, the High Priest. This is a long passage where the writer will touch on three specific topics:

In the previous section the author was reminding his readers not to ignore the warning contained in God's Word concerning disobedience and disbelief. He told them that because of this, Moses' followers had not entered their "rest" in the promised land. The suggestion was that they were in danger of the same fate if they disbelieved and disobeyed their leader, Jesus, and would not enter the true promised land and true rest which was heaven.

In verses 14-16 he changes gears and encourages them to renew their efforts to go forward towards this rest/promise because they have a helper who is already there awaiting them and helping them to enter in. This is the key idea in this section. It is with this device that the author introduces the idea that Jesus is also a high priest. He boldly makes his summary idea in one concise statement.

14Therefore, since we have a great high priest who has passed through the heavens, Jesus the Son of God, let us hold fast our confession.

15For we do not have a high priest who cannot sympathize with our weaknesses, but One who has been tempted in all things as we are, yet without sin.

Even though Jesus, as Son of God and high priest, is in heaven with God, this does not mean He cannot relate to the problems of human suffering and failure. He, as a man, was tested by Satan and by the limits of humanity and did not sin. The suggestion is that in Him we have the perfect mediator. One who can understand and sympathize with our weaknesses but, at the same time, can stand boldly before God on man's behalf because He Himself has no guilt or condemnation due to sin.

16Therefore let us draw near with confidence to the throne of grace, so that we may receive mercy and find grace to help in time of need.

Since Jesus knows the power of sin (He was tested), the weakness of men (He was fully human) and the mercy of God (He had a divine nature), His followers can approach God with confidence. He has gone before them and prepared the way and now tells them that if they come in His name, they will find mercy and God's help when they need it.

In chapter five the author introduces Aaron, Moses' brother, who was the first high priest. If he is to make a comparison to Jesus, he needs to describe who Aaron was and what he did. Originally, the ones who offered sacrifices to God as a form of worship were the heads of families. We often read about instances where Abraham, Isaac, Jacob and their sons offered animal sacrifices to thank or make pledges to God (Genesis 12:7-8; Genesis 35:7). The basic idea behind a sacrifice of any kind was that something was transferred from the physical realm to the spiritual realm through death or destruction. Death or destruction was the passageway from this dimension to the spiritual or unseen dimension. For example:

When God gave the Law to Moses, He also included a more formalized system of sacrifices that contained specific instructions concerning the reasons, times, manners and materials to be used in the practice of sacrifice. Much of this information is contained in the book of Leviticus. The Jewish religious system of worship was built around the activity of sacrificing to God a variety of animals and produce in order to express (transfer from physical to spiritual) different things. Sacrifices that expressed thanksgiving, purification, atonement, blessing, etc. In Leviticus 1:6 we read the instructions for the preparation of sacrifices such as burnt offerings, peace offerings, sin offerings and guilt offerings, to name a few.

God provided the details concerning the killing and preparation of the animal, how to actually offer the sacrifice, the order in which it was to be presented, and what other items were to accompany the sacrifice. It was complex, demanding, expensive and time consuming. Some sacrifices had to be done every day, others on special occasions. In addition to these, the priests had to offer the sacrifices that the people brought to them as well.

God also appointed a specific person and family to carry out these tasks, as well as a specific place where things were to be done (tabernacle/temple). Aaron, Moses' brother from the tribe of Levi, along with his sons were the first ones appointed by God to this role. Sacrificing would no longer be done by the heads of each family, but by a high priest on behalf of all the families. The important point to remember here is that this task/ministry was only given to Aaron and his sons and their descendants. According to God's Law, only the descendants of Aaron could serve as priests. This is why they called it the Aaronic priesthood. The high priest also had an elaborate rite of purification and dress that we read about in Leviticus 8:6-9,

And so, when the author speaks of the high priest, this is the grand image that his readers have of this person, his exalted position and his ministry.

1For every high priest taken from among men is appointed on behalf of men in things pertaining to God, in order to offer both gifts and sacrifices for sins; 2he can deal gently with the ignorant and misguided, since he himself also is beset with weakness; 3and because of it he is obligated to offer sacrifices for sins, as for the people, so also for himself. 4And no one takes the honor to himself, but receives it when he is called by God, even as Aaron was.

After reviewing the history and work of the Aaronic priesthood, he notes that they were not all selected on the basis of merit, but rather by the will of God. The author also reminds them that even the priests had to, in the course of their temple service, offer sacrifice for themselves because they also were weak and sinful people, just like the people they represented before God. The idea was that in this way they could understand and sympathize with the people they served. Even Aaron, the first high priest appointed by God, was a weak and sinful man.

Jesus is also a High Priest

The author has already stated this, but in these verses he shows that Jesus has better qualifications to be a high priest than Aaron and his descendants. He mentions two things:

5So also Christ did not glorify Himself so as to become a high priest, but He who said to Him,
"You are My Son,
Today I have begotten You";
6just as He says also in another passage,
"You are a priest forever
According to the order of Melchizedek."

Just as Aaron was appointed by God, so was Jesus. He proves his point by quoting two Old Testament scriptures that speak of the Messiah/Son of God and His position (Psalms 2:17; 110:4). The idea is that the Messiah was to be a priest forever, appointed by God along the lines of an Old Testament priest called Melchizedek, not Aaron. In other words, Jesus traces His priestly lineage back to Melchizedek (a person who existed before Aaron), not Aaron. The writer does not explain who this Melchizedek is right away, he merely establishes Christ's appointment as high priest and His lineage. The author knew that for Jews, another stumbling block to accepting Jesus as a high priestly mediator was that He was descended through His earthly father, Joseph, through the line of Judah, not Levi, where the Aaronic priests came from. He will explain the significance of this lineage later.

7In the days of His flesh, He offered up both prayers and supplications with loud crying and tears to the One able to save Him from death, and He was heard because of His piety. 8Although He was a Son, He learned obedience from the things which He suffered. 9And having been made perfect, He became to all those who obey Him the source of eternal salvation, 10being designated by God as a high priest according to the order of Melchizedek.

In order to qualify as a priest you needed to be appointed by God so as to have a right to stand before Him, and you needed to be able to relate to those whom you represented. Aaron qualified in both respects because he was appointed through Moses, and he was human.

In this section the author shows that in addition to His divine appointment, Jesus qualified as one who knew the sufferings of men because He also suffered greatly. He suffered anguish in the garden before His death and, like all men, prayed to God with tears to help Him in His hour of trial. He suffered the restrictions of a human nature and did only what the Father instructed, thus demonstrating that He knew how to obey. He was never morally imperfect, but His human nature was brought totally into submission to God's will, even to the point of death. This is the kind of perfection/maturity revealed here.

Jesus qualified as a priest because He was appointed by God to serve in this way, and He, like Aaron, knew well the sufferings and limitations of the human nature (unlike Aaron however, He was perfect - no sin). The author makes his point in verses 9b-10. Because Jesus is qualified in this way, He is able to perform the priestly duties which will result not only in the temporary helping of His people (which is what happened with Aaron and his descendants, and which he will explain at length later), but Jesus is able to give them an eternal, complete salvation. He reiterates the idea of Melchizedek here as a kind of a "book-end" device to round out his opening remarks that revolved around this mysterious character: Melchizedek.

Although not fully explained yet, the author reassures all Christians in every era that they have someone already in heaven who is pleading their case at the throne of God. What does this spiritual reality mean for us? It means that we need to pray with this idea in mind and not put off dealing with sin because our high priest is in heaven pleading on our behalf. We can be sure that our sins will be dealt with effectively. Finally, we should always approach God with confidence in all matters because we have been assured that we will find grace and mercy there, not condemnation.

hebrews 4hebrews 5
Help keep our materials free and allow us to produce more biblical content.
Support this Ministry
Want to be notified whenever new material is added?
Subscribe by Email
Please send me more preacher training videos in French!