Class by:
Mike Mazzalongo
The first lesson in this series reviews the background information on the author of this gospel and the style he uses in presenting Jesus' life and ministry.
Mark 1:1-13
July, 2015
32:49
7 minute read 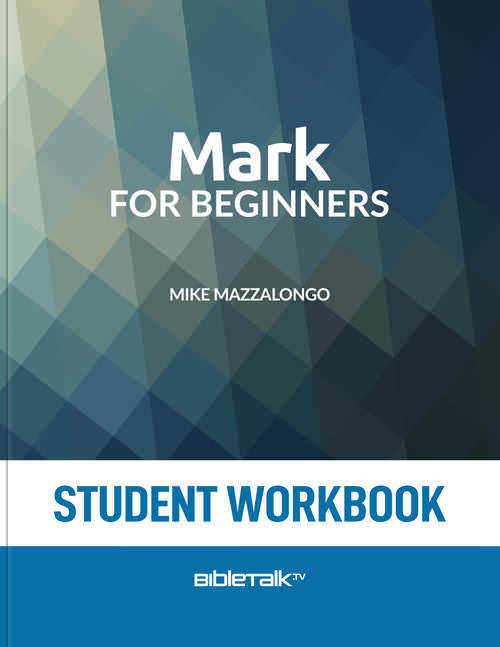 Mark's gospel is the "urgent" gospel because it is the shortest of the four gospel records, probably the first written and most borrowed from (the gospel of Luke contains 350 verses taken from Mark's account). Mark spends no time explaining Jesus' family background and provides no foundational material before announcing in the very first verse of the opening chapter that Jesus Christ is the Son of God.

In order to establish some context for Mark's book let us briefly examine two major periods in the first century in which the gospel records were circulated.

Most Christians claim that the Bible's authority in moral and spiritual matters is based on the fact that it is inspired or authored by God and recorded by men under His divine control. We believe this for several reasons:

1. The Bible makes this claim about itself

In the Bible we read that Jesus promised the Apostles that after His return to heaven He would inspire them to record His teachings and commands:

But the Helper, the Holy Spirit, whom the Father will send in My name, He will teach you all things, and bring to your remembrance all that I said to you.
- John 14:26

Paul the Apostle also taught that the Bible (Scripture) was inspired:

All Scripture is inspired by God and profitable for teaching, for reproof, for correction, for training in righteousness;
- II Timothy 3:16

Peter the Apostle claimed that every word contained in the Bible was from the Holy Spirit:

20But know this first of all, that no prophecy of Scripture is a matter of one's own interpretation, 21for no prophecy was ever made by an act of human will, but men moved by the Holy Spirit spoke from God.
- II Peter 1:20-21

The Bible is the only book that contains hundreds of prophesies that were exactly fulfilled. One of these prophecies is contained in the book of Daniel where the prophet, Daniel, describes the exact order and nature of four world powers that would appear in the future (Daniel 2:1-35). His prophecy concerning these four historical empires (Babylonian, Medo-Persian, Greek, Roman) was recorded 600 years ahead of time.

This is only one of the hundreds of examples of this phenomenon contained in both the Old and New Testament portions of the Bible. As one reads these he is naturally led to the conclusion that for this book to have so many fulfilled prophecies it must have a supernatural source, because only God knows the future.

3. Quality of the book

The Bible is composed of 66 individual books written by more than 40 different writers, and spans a period of 1600 years. And yet, when examined, one finds no contradiction or mistakes, and only one story being told by all of its contributors who, for the most part, did not know each other and lived in different eras and locations. This result could not be possible without divine guidance.

There are other reasons to believe in the inspiration of Scripture. Two of which are the witness of the risen Christ and the impact and longevity of this one book over a 2000 year period. When you take all of these reasons together they can only be explained in one way, and they lead to only one logical conclusion: this is not an ordinary book, it is a text inspired and produced by a Superior Being. That Being, we believe, is God.

The Bible was inspired by God, but God used men to record His thoughts, words, and the history of His people in their own style and language. One of these men was John Mark, whose book is one of the gospels.

The book of Mark says nothing about its author, but early church tradition points to John Mark who was the son of Mary, a wealthy Jewish woman who lived with her family in Jerusalem. Mary was a friend of the Apostles and it was to her house that Peter went after he was released from jail (Acts 12:12).

John Mark was the cousin of Barnabas, who was very active in the early church, and it was through him that Mark met and began to work with Paul the Apostle. Mark's association with the Apostles covered more than a 30 year span:

This has been over 30 years of service finishing with a text dictated to him by Peter, which we now refer to as the gospel of Mark.

The Gospel of Mark

We knew that Mark was an eyewitness of what happened during Jesus' ministry and the establishment of the church. Early church historians and writers tell us that he was Peter's secretary during the period before Peter's death in Rome in 68 AD. Mark's work is a record of what Peter said, saw and taught.

Jesus' family, the Apostles and the early church all knew Mark. They confirmed his presence and work in the church for over three decades. This means that he was a real person who lived and worked with Jesus and the Apostles, not simply a fictional character of religious literature.

Early church historians who recorded the persons and events surrounding the beginning of the Christian age all confirm that this text was written by John Mark (Papias 115 AD, Clement 180 AD, Origen 225 AD). Mark's gospel was widely circulated at the time and none of the church leaders disputed or criticized its content or author.

The reason for this review is to demonstrate that Mark's gospel met all the requirements to be recognized as an inspired book and thus included in the New Testament canon. This was important because there were many books circulating that claimed to be inspired but did not fulfill the criteria necessary for acceptance. These requirements were as follows:

Of all the books written and circulated, only 27 passed the test. Mark's gospel possessed all of these features and was accepted as an inspired book of the Bible.

The text of Mark itself is straightforward, and free of abstract ideas (like the gospel of John), which would not appeal to the Roman mindset. It is direct and to the point.

The book was written while Peter was in Rome working with Roman Christians. It seems that Mark's gospel was aimed at people who did not have a Jewish background; this is why there was little reference to Jewish history. Unlike Matthew's gospel which was full of references to Old Testament passages and ideas since he was addressing his fellow Jews, Mark had no need to prove who Jesus was to a Jewish mindset. The typical Roman was mechanically minded and wanted his information in summary form. Mark obliges by presenting a gospel record that is short and to the point providing them with a "big picture" point of view.

The book of Mark is a historical narrative that gives a description of Jesus' life, work and teaching, as well as His death and resurrection, with little background information or philosophizing. It is like a snap shot or a post card. Mark's gospel is totally Christ centered, telling the story of Jesus' life, death and resurrection, and then it ends.

This gospel writer is not interested in character analysis or doctrinal development. His book is about action and reaction. A good example of this is that more space is given over to miracles in this book than in any of the other gospels. Eighteen out of the 35 possible miracles are described. Also, reactions of people to Jesus are carefully noted in Mark. Over 23 references to people who were amazed, puzzled, astonished, hostile, etc.

In summary, Mark's gospel is short, to the point, colorful and powerful. It tells the simple story of Jesus without much background information and then ends with a challenge; believe, be baptized and be saved, or disbelieve and be condemned. The reader is forced to deal with the facts by deciding.

The central theme of Mark is very clear: Jesus Christ is the divine Son of God. This is the point of the gospel and Mark divides his book into three simple parts:

This is a book that appeals to the practical mind.

Each book in the Bible has a purpose and a particular audience. Mark's audience is the world. His attitude is: everyone needs to know, in no uncertain terms, that Jesus is the divine Son of God and the Savior of the world, and the world needs to deal with this truth.

The book of Mark is a great first book to read with a non-Christian. It is short, simple and focused, and for these reasons appeals to those who do not have much general Bible knowledge.

Reading Assignment:  Mark 1:1-45
mark 1
Help keep our materials free and allow us to produce more biblical content.
Support this Ministry
Want to be notified whenever new material is added?
Subscribe by Email
We have used BibleTalk.tv in small group studies and found them effective.