Series » Colossians for Beginners
8 of 12
Print Save for later

Class by:
Mike Mazzalongo
Paul begins to explore another area where Christ is first or preeminent and that is in the determination of what is ultimately right or wrong.
Colossians 3:1-11
May, 2016
26:27
8 minute read 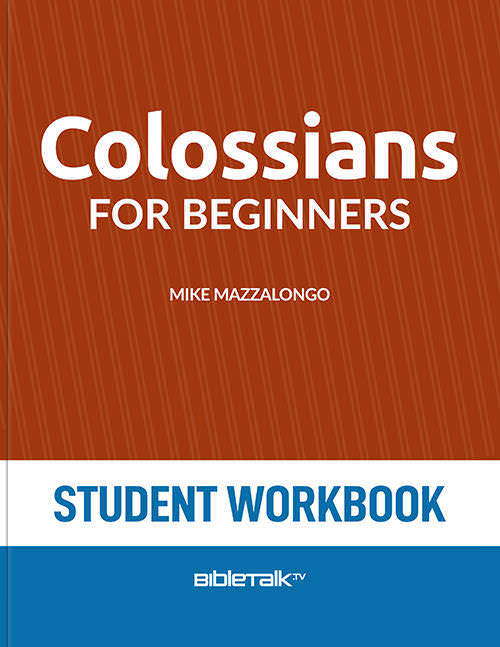 So far in this letter Paul has been defending the church against the influence and doctrines of false teachers. We said that these teachers were promoting doctrines that denied the all-sufficiency of Christ and His sacrifice to accomplish salvation. They were suggesting that the Colossians needed further teachings and adherence to Jewish Law in order to be saved. They also boasted of superior spirituality because of their claim to certain visions and secret knowledge.

Paul demonstrates that Christ is pre-eminent in every domain regardless of the dimension. Jesus has authority because He is part of the Godhead and exercises His pre-eminence in creation, mankind, the church as well as in the underworld.

He also shows that response to His teachings accomplish all that is needed. Spiritual circumcision in baptism leads to regeneration as well as unity with Christ and God.

Once he has completed his response to the false teachers by exhorting the Colossians not to fall for their schemes, Paul goes on to develop the true doctrine of Christ in regard to Christian living. He has dealt with what the false teachers said concerning how to become a child of God, now he will teach them Christ's way to live an ethical and pleasing life before God.

So we begin the fourth section of this epistle which demonstrates Christ who is pre-eminent in ethics (in other words right and wrong living according to Jesus).

In chapter 3, Paul will begin by summarizing everything he has already said and presenting it as the basis for the rest of the section. If Jesus' doctrine is pre-eminent, then the lifestyle that flows from it will also be superior to the lifestyle that comes from the Judaizers' teaching.

A. The Standard of Christian Living

When we talk about "standard of living" we usually mean how wealthy we are, how many things we possess, what advantages of lifestyle we enjoy in comparison to the very rich or very poor. Paul talks about a "standard" for Christian living which compares our life not with earthly wealth or values, but with a heavenly, spiritual standard set by Christ.

Vs. 1a – Therefore if you have been raised up with Christ

He begins by reaching back to the previous chapter to pick up the idea of baptism where he previously explained that Christ makes new creatures of them. At baptism their old nature of sin is removed, sin is forgiven, the Holy Spirit is given, a new person emerges. He says, if this is what has happened to you – in baptism you were raised up from the death of sin and condemnation (just as Christ was raised from the grave), then…

Vs. 1b – keep seeking the things above, where Christ is, seated at the right hand of God.

You have a new standard of living to which you now strive. The standard is the one established by Christ who is in heaven. That Jesus is at the right hand of God in heaven is an exalted way of saying that Jesus is divine and has the authority of God. What He has established (through His teaching), this is the heavenly or godly standard.

They are to focus on the things that Christ (who is above) has taught and established, and not the things taught and promoted by the Judaizers. Things that have to do with earthly rules about food and rituals. Teachings that promote the rule of the earth by demon-angels, etc. If you have been raised with Christ then you are freed from earthly rules about religion, fears concerning demons – you are now living according to the true spiritual standard set by the One who is actually in heaven.

Vs. 3-4 – For you have died and your life is hidden with Christ in God. When Christ, who is our life, is revealed, then you also will be revealed with Him in glory.

Again he refers to the death that Christians experience in baptism but adds that at this point we also become united to Christ. He uses the word hidden because as far as the world is concerned, what we will become in Christ will not be revealed until Jesus Himself returns at the end of the world. He will be revealed as the glorious and only begotten Son of God, judge of the world; Christians will be revealed as resurrected and glorified sons and daughters of God who will live and reign with Christ forever.

The point here is that if this is true (that Christians are united to God in Christ and will be revealed as the glorious eternal Church in the end), by what standard should they now live? The unstated answer is that they certainly should not be living according to the false (and quite earthly) standard the Judaizers were trying to set for them.

In the first 4 verses Paul summarized what he will break into detail in the next several verses. The details of this spiritual/heavenly/Christ-centered standard fall into several categories.

Paul begins where the new life of the Christian begins to show itself first – in the personal conduct of the individual. Remember the point here – he is saying that as Christians they are not to be enslaved to the false earthly standard of religion set by the Judaizers. This standard had to do with what they ate, cutting their flesh, worship to minor spiritual beings and submission to the teachers themselves, etc.

He is saying that as Christians they need to focus on the heavenly standard of true religion established by Christ who is in heaven and who will bring them to heaven as well.

Vs. 5a – Therefore consider the members of your earthly body as dead

Since he has encouraged them to seek or focus on the heavenly standard of holiness, Paul also adds how to arrive at this point. They are to deaden their flesh to sin. They have died and been raised as new creatures in baptism. This new life resists the attempts by the body to reassert its old life of sin. The admonition is quite clear – render dead your appetite for sin. Do not offer your body up for unholy activity, and he names 5 things they are to be "dead" to.

Vs. 5b – ...dead to immorality, impurity, passion, evil desire, and greed, which amounts to idolatry.

Four of these are sexual in nature and one is greed.

All of these (usually come together) produce the sin of idolatry, the worship of sensuality and sexual gratification rather than the worship of God. Paul says that personal holiness begins with the control (deadening) of the flesh to temptations in the most basic area of life – human sexuality.

Vs. 6-7 – For it is because of these things that the wrath of God will come upon the sons of disobedience, and in them you also once walked, when you were living in them.

He reminds them that this type of activity will be punished by God. They must not be fooled by high minded ideas that indulge in sexual immorality. For example, homosexuality finding acceptability under the banner of Political Correctness.

These type of activities and attitudes are wrong and God will punish on account of them.

He also reminds them that they were once guilty of these things, considered them as a normal part of life – but since their resurrection in Christ they now live according to a new standard where they are to refuse their bodies' desire for these things.

This line also serves as a bridge to the next verse where Paul will list another group of sins that they are to avoid.

Vs. 8 – But now you also, put them all aside: anger, wrath, malice, slander, and abusive speech from your mouth.

The first group of sins brings harm and offence to one's own body, these next sins bring harm to others.

Along with verse 5 this makes a list of 10 things to resist in the pursuit of holy living. It is not a comprehensive list of every sin there is but the fact that Paul refers to sins of sensuality and those of speech shows that he is including all the earthly evils we desire in our hearts and evils we commit as a result of what comes from our hearts. The resurrected man/woman has a new heart which neither desires these things nor produces these things – and it is evident.

Finally, personal holiness requires a new approach to personal relationships with others. An approach based on truth.

Vs. 9 – Do not lie to one another, since you laid aside the old self with its evil practices,

Paul returns to the historical moment when the old man, old sinful, old devious nature was removed and replaced by the new, purified, holy nature put in its place – baptism. Because this has happened they must leave off the sin of lying.

Vs. 10 – and have put on the new self who is being renewed to a true knowledge according to the image of the One who created him

This is especially necessary because this transformation was made in order to bring them back to their true and original form. Before sin, Adam was the true image of God, sinless, pure, knowing God. He lost this status because he sinned and was plunged into darkness, separation and death.

All humans shared in this fallen nature after him. Now that Christ has renewed man to his true nature (sinless, having a relationship with God), man must be truthful in his relationships with others.

Vs. 11 – a renewal in which there is no distinction between Greek and Jew, circumcised and uncircumcised, barbarian, Scythian, slave and freeman, but Christ is all, and in all.

This renewal is not simply a change of ethics or a new set of moral rules, it is a complete change that occurs to anyone who experiences the saving power of Jesus. No matter who you are (Paul mentions sets of disparate people)…

No matter what group you formerly identified with, you were a sinner, did not know the truth, lost in sin – but because of Jesus you have become a new creature, a Christian. Now as a Christian none of these labels mean anything; you have been liberated by the truth, you know the truth (that God renews everyone through Christ); and now you must live according to this truth.

Part of leaving off these old labels is to pursue personal holiness, and part of personal holiness is to speak the truth since they were renewed by truth. In the end everyone comes together in Christ because everyone is focused on Him and the heavenly things connected to Him.

In this chapter we looked at the first of these which was the pursuit of holy living which required the denial of various evil desires and the effort to speak the truth to everyone. In the next chapter we will move on to the next element in the heavenly standard – a loving attitude.

Reading Assignment:  Colossians 3:12-17
Help keep our materials free and allow us to produce more biblical content.
Support this Ministry
Want to be notified whenever new material is added?
Subscribe by Email
BibleTalk materials are well done and contain sound Bible Teaching. I encourage churches to become aware of this excellent service.