The Life and Times of Isaiah

Class by:
Mike Mazzalongo
In this first lesson, Mike will give a brief introduction of Isaiah himself and how his book was written.
January, 2021
29:27
5 minute read
Watch
YouTube Vimeo
Download
Video (720p) Audio (.mp3) Slides Notes

To say that the Book of Isaiah is difficult to understand is an understatement. You read the book and understand the individual words but can never quite grasp the whole. At times, you're not sure if Isaiah is repeating himself or talking about someone or something new. At other times you feel that you're on solid ground as he recounts some historical event with real people in real-time, but then without warning, he relates a vision given to him by God.

Many times the literary devices used to help discern the meaning of a passage actually confuse the reader if he is not familiar with Hebrew poetry and Isaiah's style of writing. This book will try to simplify and clarify Isaiah's prophetic message for those reading him in the modern age.

We will begin with a brief introduction of Isaiah himself and follow with how his book was written.

Isaiah refers to events and times before his ministry and well into the future beyond his own lifetime. Let us, therefore, review a brief timeline of Jewish history and the various books and authors who recorded it. This will help us identify some of the major events Isaiah refers to as well as pinpoint the period of this prophet's ministry.

Isaiah was the son of Amoz who is mentioned several times in connection to Isaiah but no other information is available about him. Isaiah is considered one of the major prophets along with Jeremiah, Ezekiel and Daniel. This is because of the length of their writings and not that they were somehow more important than the other prophets. Isaiah's book, however, appears first among the books of the prophets in the Old Testament canon - a position of honor since Isaiah was at times referred to as the prince of prophets.

Isaiah's name means - "The Lord Saves." As was noted in the Old Testament timeline, Isaiah lived and prophesied during the time of other Jewish prophets (Amos, Hosea and Micah).

We know that his ministry began in 740 BC because he himself mentions in Isaiah 6:1 that his visions began the year that King Uzziah died and his death is noted by secular historians. Isaiah was married and in his own writings he refers to his wife not by her given family name, but rather by the term "prophetess" (Isaiah 8:3). He may have done this because she was the wife of a prophet, or because she herself was used by God in this way, but we have no record of it.

Isaiah had two sons that were given names which signified prophetic statements made by their father.

It is interesting to note that the Bible mentions various details of the marriages of several of the prophets, for example:

Isaiah probably spent most of his life in Jerusalem and judging by the quality of his writing and his access to the royal court of successive Kings (Uzziah, Jotham, Ahaz and Hezekiah) scholars believe that he was a well-educated, wealthy aristocrat or perhaps part of a priestly family.

Even though it seems that Isaiah had a high position in the society of his time, he was very much aware of the plight of the poor, the excesses of the rich and the injustices visited on the common people by those in power as well as the immorality and unfaithfulness that existed at every level of society both rich and poor.

Despite the advantages of education, wealth and access to the royal court, as God's prophet, and very much like the more common social justice prophets who were his contemporaries (Amos, Hosea, Micah), Isaiah spoke out powerfully. Not only did he speak truth to power, he did so with a beautiful, complex and majestic style of writing.

Isaiah's bold and fearless pronouncement of God's word is what probably led to his death at the hands of Manasseh, who Jewish tradition says had the prophet executed by having him sawed in two.

They were stoned, they were sawn in two, they were tempted, they were put to death with the sword; they went about in sheepskins, in goatskins, being destitute, afflicted, ill-treated.
- Hebrews 11:37 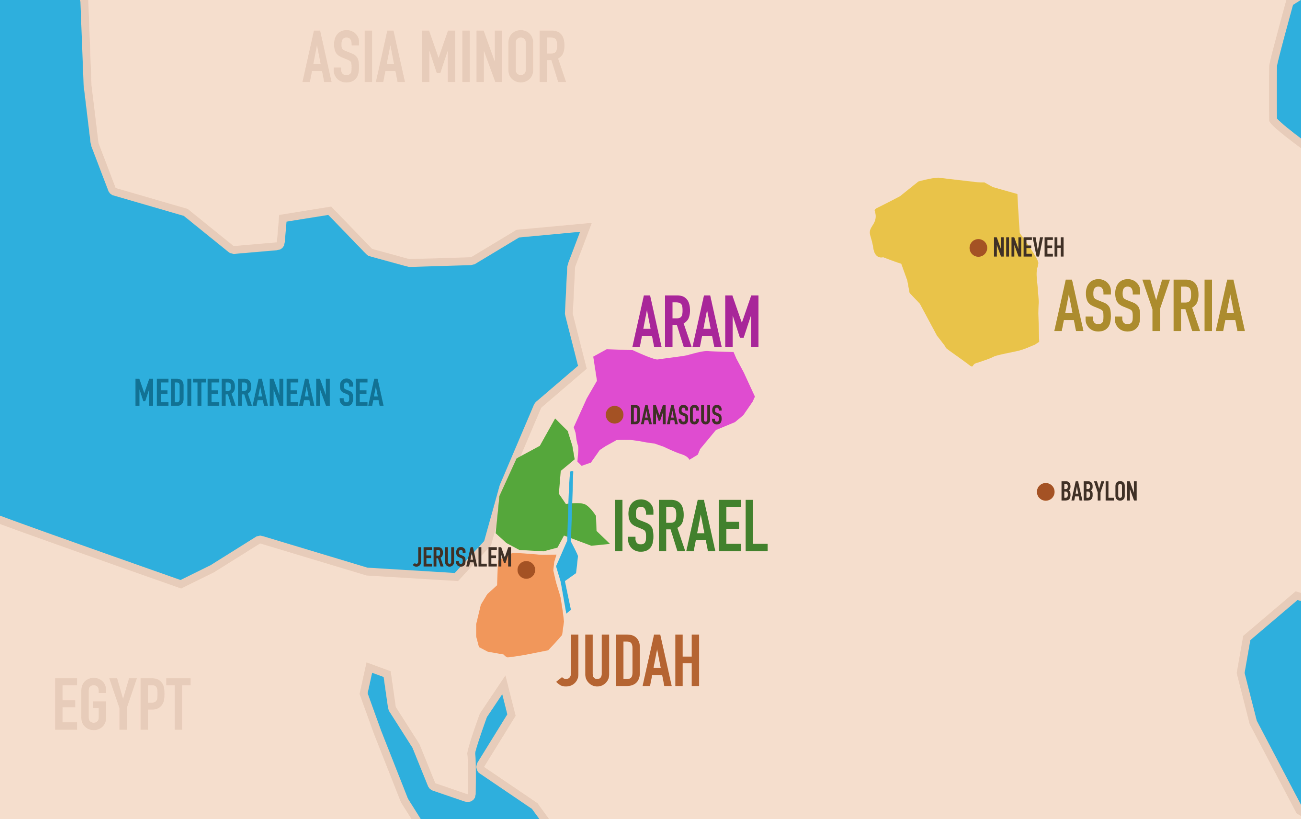 Isaiah wrote during a stormy period, marking the expansion of the Assyrian empire and the decline of Israel. Under King Tiglath-Pileser III (reigned 745-727 BC) the Assyrians swept westward into Aram (Syria) and into Canaan where the Northern Kingdom of Israel was located. They then continued downwards into Israel. In response, the Kings of Aram and Israel tried to pressure King Ahaz of Judah (Southern kingdom) into joining their alliance against Assyria.

Instead of joining this alliance, Ahaz chose to ask Tiglath-Pileser for help against Israel and Aram. Today, we call that a "double-cross". Isaiah condemned this decision (Isaiah 7).

Assyria did help Judah by conquering and deporting the Northern Kingdom but this left the Southern Kingdom even more vulnerable and exposed to attack from the North. Following its desire for complete domination of the region, in 701 King Sennacherib of Assyria threatened Jerusalem itself (Isaiah 36:1-ff).

The godly King Hezekiah prayed earnestly and Isaiah prophesied that God would force the Assyrians to withdraw, and they did (Isaiah 37:6-7). Nevertheless, Isaiah warned that because of her sins, Judah would be defeated and brought into captivity by the Babylonians (the nation that defeated the Assyrians and took their place as the super power of that era).

Although the fall of Jerusalem would not take place until 586 BC (more than a century into the future), Isaiah's prophecy accurately foretold:

Isaiah also predicted the rise of Cyrus, who would unite the Medes and the Persians, and these under Cyrus would conquer the Babylonians in 539 BC (Isaiah 41).

The decree of Cyrus in 528 B.C. would eventually allow the Jews to return home to rebuild their city, wall and temple. In his prophecy, Isaiah claimed that this deliverance would prefigure another deliverance, this time from sin, which would take place even further into the future.

Isaiah's many visions and prophecies spoke of people and events in the present, near future and distant future - all of which make him one of the most dynamic prophets in the Bible.