Series » The King and His Kingdom
6 of 12
Bookmark Print

Class by:
Mike Mazzalongo
Jesus used parables as a mainstay of His teaching. This lesson looks at the definition, use and meaning of parables used by the Lord and recorded by Matthew.
Matthew 13:1-52
August, 2014
33:27
9 minute read 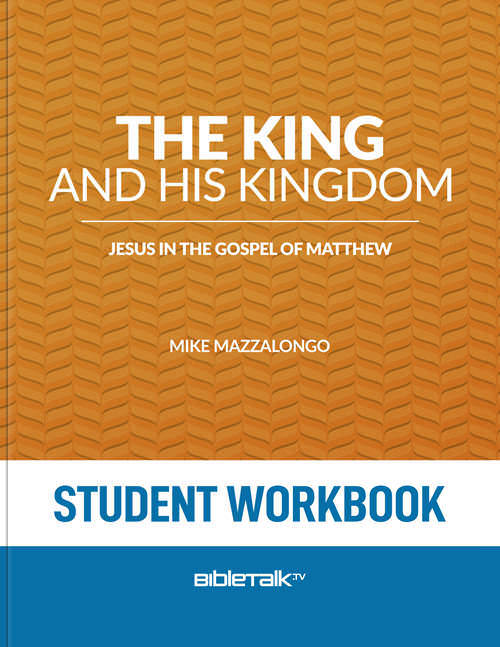 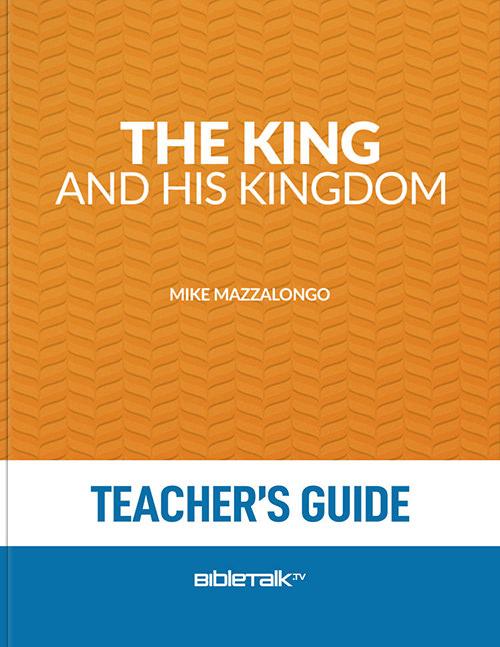 So far in our study we have seen that Matthew focuses on Jesus' royal character as the King of the kingdom of heaven. Matthew has described:

In this chapter we will examine one of the basic tools that the King used in helping His kingdom to grow. Since faith is the key that allows one to enter the kingdom, the nourishing of that faith is the way that Jesus uses to promote individual growth of those already in the kingdom.

So faith comes from hearing, and hearing by the word of Christ.
- Romans 10:17

One of Jesus' methods for developing the faith of His disciples was His use of parables. Matthew explains that Jesus did this for two reasons:

Many times He would be teaching a large crowd, and in the group would be both believers and non-believers. The parable format was perfect in reaching one group while leaving out the other. For this reason I'd like to talk about parables as a form of teaching in order to better understand the actual parables that Jesus used to teach His followers.

In addition to this, it was a format that was understood by those who were uneducated, and the information was easily remembered.

Most parables contained an imaginary story about something that could have happened, but was used to illustrate some higher spiritual truth. These were not fables or myths because the lessons contained stories that could have actually happened.

Parables were not a device invented by Jesus but He used this form of teaching with great insight and effect. In the New Testament only Jesus uses parables, and they are recorded in the gospels of Matthew, Mark, and Luke but not in John. Some are repeated in more than one gospel, and many are exclusive to one gospel (i.e. Pearl of Great Price – Matthew; Good Samaritan – Luke).

In order to draw accurate lessons from the parables there are some basic rules to follow:

1. Look for the spiritual truth as it applies to the situation that prompted the telling of the parable in the first place.

For example, to say that the parable of the Good Samaritan teaches that the doing of good to others is the be all and end all of Christianity neglects to take into consideration the cross of Christ and the need for repentance and faith. This would oversimplify the meaning of this teaching.

On the other hand, if one says that the parable about the master who paid each of his workers the exact same salary for varying hours of work should be a guide to our business ethics misses the point of the parable by giving too much attention to the details of the story. This parable in Matthew 20:1-17 is about grace, not economics. One needs to search for the general spiritual principle that includes the greatest number of details.

3. Parables illustrate truth (like pictures in a textbook illustrate the text) but they do not prove truth. We shouldn't formulate doctrine based on parables alone.

For example, none of the parables prove that Jesus is the Son of God. We need to look to other passages that describe His miracles, teachings and resurrection in order to establish this important point of doctrine.

We need to understand that parables are not doctrinal statements, but they are figurative ways of pointing towards unseen things. Parables lay down a story with concrete things next to spiritual and unseen things so that through what we see what is unseen comes into view.

4. Look for the meaning or conclusion within the parable itself or within the context before drawing your own conclusion.

Sometimes Jesus gives the meaning of the parable at the beginning or at the end of the story (The Rich Fool, 12:16-21). Sometimes He asks one of His listeners to give the meaning (The Good Samaritan, Luke 10:25-37). There are instances where He responds to a question about the parable from a listener in the group. For example, His disciples ask Him how something entering a man's mouth defiles him (Mark 7:17-23). Then there are those times when people are left to draw their own conclusions. In Mark chapter 12 the gospel writer describes the religious leaders drawing the correct conclusion from a parable about wicked servants beating and killing their master's son, was really a parable directed at them.

Usually the primary meaning is already contained within the parable itself and is applicable to the situation that the parable first addresses. For example, the parable about the Prodigal Son is first and foremost about forgiveness. Any application made from that parable begins with this idea. Correctly interpreting a parable requires us to grasp and explain this primary meaning in the story itself before making applications to modern situations. In other words we must ask ourselves, "What is the lesson for the people in the parable?" Once we have determined this we can make other comparisons and applications to situations today.

5. Jesus and His parables are one.

Other teachers and moralists can be separated from their teachings, but not Jesus. For example, Confucius, the Chinese moralist wrote many parables and sayings but these were based on ancient wisdom and practical intelligence, not on himself. Voltaire, the French philosopher wrote fables commenting on social issues and human nature, but he himself was not at the center of his own fables.

Jesus' parables, on the other hand, are about Himself and His kingdom. The reason people failed to understand His parables was because they failed to accept Him as the Messiah. They understood the story, but the significance of the parables was lost on them because they did not believe that He was the Son of God, and it was this insight that unlocked the true meaning of His parables.

He told the parables in such a way that in rejecting Him, they were unable to understand the things concerning the kingdom taught in the parables. He was the key that unlocked the hidden meanings in the stories.

Many of Jesus' parables were about the kingdom, its nature, its coming and its value. Matthew's gospel has seven of these types of parables contained in chapter thirteen alone! The interpretation of these particular parables has varied throughout the years depending on the theological position one held. For example:

20And again He said, "To what shall I compare the kingdom of God? 21It is like leaven, which a woman took and hid in three pecks of flour until it was all leavened."
- Matthew 13:20-21

1. One view sees the kingdom coming suddenly and cataclysmically in the future, therefore all parables concerning the kingdom are seen from this perspective.

2. Another view teaches that the kingdom is fully realized and completed here, and we are only adding to it as time goes by.

3. In my opinion, the view that is more biblically accurate says that the kingdom has already been established by Christ here on earth, but will be fulfilled with the resurrection and glorification of the saints when Jesus returns.

Kingdom parables are meant to demonstrate the behavior and spiritual development of kingdom dwellers until the King returns.

In Matthew 13 we see seven kingdom parables and an explanation of the reasons for using parables, as well as examples of most of the devices concerning parables mentioned in this section of study.

3And He spoke many things to them in parables, saying, "Behold, the sower went out to sow; 4and as he sowed, some seeds fell beside the road, and the birds came and ate them up. 5Others fell on the rocky places, where they did not have much soil; and immediately they sprang up, because they had no depth of soil. 6But when the sun had risen, they were scorched; and because they had no root, they withered away. 7Others fell among the thorns, and the thorns came up and choked them out. 8And others fell on the good soil and yielded a crop, some a hundredfold, some sixty, and some thirty. 9He who has ears, let him hear."
- Matthew 13:3-9

Here Jesus is telling the parable of the Sower and the Seed as a response to the rejection He has experienced from the people and their leaders. The parable will teach that not all will receive the kingdom, and provides an explanation as to why He will now use parables exclusively in His teaching ministry as a way of separating believers from non-believers.

10And the disciples came and said to Him, "Why do You speak to them in parables?" 11Jesus answered them, "To you it has been granted to know the mysteries of the kingdom of heaven, but to them it has not been granted. 12For whoever has, to him more shall be given, and he will have an abundance; but whoever does not have, even what he has shall be taken away from him. 13Therefore I speak to them in parables; because while seeing they do not see, and while hearing they do not hear, nor do they understand. 14In their case the prophecy of Isaiah is being fulfilled, which says,

'You will keep on hearing, but will not understand;You will keep on seeing, but will not perceive;15For the heart of this people has become dull,With their ears they scarcely hear,And they have closed their eyes,Otherwise they would see with their eyes,Hear with their ears,And understand with their heart and return,And I would heal them.'16But blessed are your eyes, because they see; and your ears, because they hear. 17For truly I say to you that many prophets and righteous men desired to see what you see, and did not see it, and to hear what you hear, and did not hear it.- Matthew 13:10-17

Verses 18-23 give us an example of Jesus explaining His teaching to the disciples as well as providing the correct commentary and meaning of the parable of the sower.

The remaining kingdom parables are in groups of three, separated by two statements and followed by a summary:

B) Parenthetical statement that the use of parables by the Messiah was according to prophecy about Him (vs. 34-35).

C) Explanation of the Parable of Wheat and Tares in response to a question from the disciples (vs. 36-43).

D) Parables – not all will enter the kingdom.

51"Have you understood all these things?" They said to Him, "Yes." 52And Jesus said to them, "Therefore every scribe who has become a disciple of the kingdom of heaven is like a head of a household, who brings out of his treasure things new and old."
- Matthew 13:51-52

Jesus asks if they understand the parables, and they say that they do. He responds with yet another parable. This time He compares them to the head of a household whose job it is to provide for the needs of a household.

In explaining the parable Jesus says that they are the providers of the household (kingdom) and will provide what they have been given and taught as well as what they will see and experience (their training in the kingdom). They possess some old truths such as things known and accepted (the Law and Prophets). They also have some new truths that they have learned from Jesus through the parables and witnessed with their very eyes (death, burial and resurrection of Jesus; power of the Holy Spirit).

If they have learned and understood what He has taught them, they will be able to see how both are connected and thus be able to feed and establish the kingdom accordingly.