Rules of Engagement for Successfully Sharing Your Faith

Class by:
Mike Mazzalongo
In any type of warfare, there are rules of engagement. These are put in place for the protection of all parties involved and to also help the battle (or discussion) move forward.
October, 2017
33:55
8 minute read 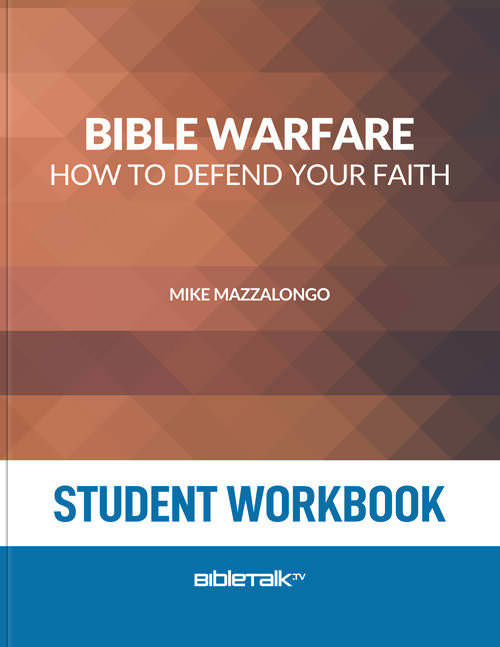 This study is designed to help you defend your faith against questions from non-believers or comparisons by people who belong to religious groups that may claim Christ as their leader, but do not follow carefully the teachings of the New Testament. In America seventy-eight percent of the people say that they are Christians, however that seventy-eight percent will include many who simply claim a belief in God but don't actually know the Bible, haven't been baptized and couldn't tell you exactly how they were saved or why they belong to the church they attend, if they even attend church services regularly.

Hopefully after this study you will find the scripture or teaching that answers your friend's question or your family's objection about a particular issue. In the end you are going to be stronger, more confident and more knowledgeable about what the Bible teaches about specific issues and subjects. Hopefully, you'll be able to answer with intelligence and love the questions and challenges put to you by those who are not members of the church but wonder why you are!

In any type of warfare there are rules of engagement. One of the main reasons for this is so that the outcome of the war can be determined with the least amount of damage and loss of life as possible. This is why the wounded and prisoners are cared for, why civilians are restrained, but not massacred, leaving the soldiers to fight it out.

Another reason is that if you don't fight by the rules and you lose the war, the revenge extracted upon you may be severe. Similarly, in Bible warfare there are also rules of engagement for the protection of all, and to help the discussion move forward in a productive manner.

Realize, however, that these rules are not written down or listed in the Bible. They are merely examples and helpful guides developed over a long period of time teaching and debating other people on the topic of religion. What we will study does not include all of the possible rules either, hopefully you'll be able to provide some from your own experience as well.

Alright, with that said, let's look at some of the rules of engagement when it comes to discussing or debating Bible, religious or faith issues.

Rule #1 – Understand that People are Sincere in their Beliefs, Whatever Those Beliefs are.

Regardless of the religion, philosophical system, faith experience or understanding of the Bible - if a person uses this in their interpretation of the world and life in general, realize that this is important to them.

Just because it is different from ours, even wildly different; even if we see it as totally anti-biblical, we do great harm to our personal credibility if we assume that their views are less important to them than our views are to us.

There have been many people who have died as martyrs for causes and beliefs that are non-christian, even atheistic in nature. For example:

These few examples demonstrate that members of the Church of Christ don't have a corner on sincerity or zeal when it comes to religion or faith. Even the pagans who lived in the land of Canaan before the Jews sacrificed their own children to their gods as a sign of their faith.

When we begin a discussion about the Bible with a person that we disagree with (whether it's a disagreement about the very existence of God or a dispute over a minor point of doctrine) we have to begin by understanding and respecting the fact that the other person feels as strongly about their point of view as we do ours. We must also remember that it will be as difficult for them to change their minds as it would be for us to do so should the circumstances be reversed.

The Apostle Paul says that "we should speak the truth in love," Ephesians 4:15, among ourselves as Christians. I don't think I would be twisting the Scriptures if I said that we should expand this to our communication with those outside of the faith as well. We should, therefore, speak the truth in love when discussing or debating matters of faith with others because they are as sensitive as we are about these matters and without a loving approach we could wound or offend them.

Some might say that it is impossible to share the faith, correct error or teach the word without offending someone somehow. That brings me to a second rule.

We get into more problems and emotional turmoil because we go from discussing what the Bible says or doesn't say about a matter, to judging opinions, habits, traditions and feelings. For example,

In commenting on the Roman Catholic practice of having a religious service at midnight on Christmas morning someone will call it "crazy," "useless," or "dumb." However, for those who grew up with this tradition and practice, such a comment would be extremely insulting, hurtful and unproductive.

As Christians, our task in regards to other people, whether they be fellow Christians or people who follow other religions or complete atheists, our task is always the same. It's very clear, it's easy to understand, but because of our sinful natures and ignorance, not always easy to do.

Our task is given to us in Matthew 28:20 by Jesus, He says that we must "teach them to observe all that I commanded you." This task does not involve our feelings or our opinions, only the Word of the Lord – the Bible. There are some very important reasons for rule number two.

Sticking to the Word is how the Word itself tells us to debate and discuss with others about faith.

All Scripture is inspired by God and profitable for teaching, for reproof, for correction, for training in righteousness;
- II Timothy 3:16

The Bible itself tells us that we should use it in trying to convince, debate or teach other people.

B – It keeps the debate in perspective

Many times when a religious discussion gets ugly and bitter, it is usually because the exchange has become personal. Comments like, "what a stupid idea" or "that's not the way we do it at my church" or "my preacher says that you people are all going to hell."

Religion and faith are deeply personal things and just discussing them with someone else is a very risky thing. You're afraid of being wrong or looking ignorant or being rejected. Try to remember that the discussion is not between

To be productive, non-confrontational and edifying, a religious discussion should be framed in the following perspective: "How do our respective beliefs, faith, religions, line up with the Bible?"

This puts Jesus and His Word on one side and ourselves and the people we are discussing religion with on the other. For example:

Jesus is on one side and all of us are on the other. We hold all of our beliefs, including our own, up to the light of God's Word. That makes us partners in the search for truth, not adversaries.

So, a simple example of this type of approach would be a discussion with a Baptist or a Methodist friend, concerning baptism. The debate would never end if it were approached with the idea that we would argue what does the Church of Christ teach versus what do Baptists teach. The discussion becomes more fruitful and less acrimonious if we put it into this perspective. "Let's study what the Bible teaches about baptism and discuss what we've learned."

There may not be immediate agreement. The other side may not accept certain conclusions that we readily approve of, but communication will happen and God's Word will be read and discussed, and perhaps the discussion will end well with the desire to continue because there was mutual respect.

If you keep the discussion between people's beliefs and God's Word (and not between your idea versus their idea) then you have a better chance of actually teaching God's Word and will, rather than your own.

For example, the Apostles were with Jesus for three years, and yet, it took almost ten years after His resurrection for them to understand that the gospel was meant for the entire world and not just for the Jews in the entire world.

There are many obstacles that stand in the way of faith other than ignorance of the doctrines. For example,

When we are discussing religious issues with someone, we need to remember that all of these issues and more may be affecting the other person's response and attitude. We need to be willing to keep the discussion and the interchange going as long as the other person is willing to share and exchange ideas. So many people have been turned away from Christ because they were approached by people who were in a hurry to convert them without taking the time to understand them and their issues.

Some are won over quickly. Others, however, may have many obstacles to faith that require time for them to think through and accept the points you may be making concerning the Bible, so be patient.

When we engage someone in a discussion about religion, about questions concerning the Bible, we need to remember three rules of engagement in order to avoid bad feelings and, of course, the wasting of our time.

apologeticssharing faith
Help keep our materials free and allow us to produce more biblical content.
Support this Ministry
Want to be notified whenever new material is added?
Subscribe by Email
Thank you so much for your reply and recommendation. I am very happy to let you know that I contacted the church and my husband and I got baptized today and our family will attend service for the first time tomorrow. I continue to watch your videos and give thanks to God for putting them on my path. Thank you again and God bless!