Series » Isaiah for Beginners
3 of 9
Print Save for later

In building a house the first elements to go in are the foundation and the frame of the building, these give you an idea of what the finished structure will be like (a home, commercial building, barn, etc.). This is what we've been doing with our introductory material on Isaiah - seeing how the prophet put his book together. Knowing this will help us understand Isaiah's overall message.

Briefly, then, I've shown you that:

In the previous chapter, we reviewed the first two of these five strands.

In this chapter we will continue examining the next two topics Isaiah uses - The Holy One of Israel and the faith response of the Jewish people.

The Holy One of Israel

Isaiah is the prophet of holiness. In his book the word "holiness" as an adjective describing God is used more frequently than in all of the other Old Testament books together. For example, the term "Holy One of Israel" is used 25 times in Isaiah but only seven times in the rest of the Old Testament.

And so, the "Holiness" theme or strand is introduced in chapter six where Isaiah recounts his initial call into ministry through a heavenly vision. Isaiah explains the notion of holiness in three different ways:

A. Holiness and Transcendence

Here, Isaiah sees God as an exalted King with the ceaseless call of the angels crying out, "Holy, Holy, Holy." This is a heavenly vision which was not comparable to anything he had ever seen on earth (it was transcendent - it surpassed earthly/physical reality).

B. Holiness and Judgement

4And the foundations of the thresholds trembled at the voice of him who called out, while the temple was filling with smoke. 5Then I said,
"Woe is me, for I am ruined!
Because I am a man of unclean lips,
And I live among a people of unclean lips;
For my eyes have seen the King, the Lord of hosts."
- Isaiah 6:4-5

Next, Isaiah realizes the deadly result for one who is unholy and who comes into contact with or into the presence of the One who is Holy. He knows that mixing the holy with the unholy results in death.

6Then one of the seraphim flew to me with a burning coal in his hand, which he had taken from the altar with tongs. 7He touched my mouth with it and said, "Behold, this has touched your lips; and your iniquity is taken away and your sin is forgiven."
- Isaiah 6:6-7

Finally, we see one of the seraphs taking a hot coal from the altar and purging Isaiah's uncleanness thus saving his life and enabling him to stand in the presence of the Holy God. This action demonstrates that man has no power to save or ability to make himself holy. Salvation, cleansing and holiness come from God through His appointed servant (in this case, the Seraph who is at the highest level of angelic beings and associated with light or fire) and who prefigures Christ.

The concept/strand of the "holiness" of God is found throughout Isaiah's prophecies in the various ways his visions portray God:

The main storyline in the use of the Holy One strand is the rejection by the Jewish people of this Holy One and the judgment as a result (5:24). This is followed by the Holy One as Savior who invites the people to return to God (30:15). The idea of the Holy One is woven throughout the book and combined with portraits of the Messianic hope which we saw in the previous chapter and was the first of these five strands.

"The sons of those who afflicted you will come bowing to you,
And all those who despised you will bow themselves at the soles of your feet;
And they will call you the city of the Lord,
The Zion of the Holy One of Israel.
- Isaiah 60:14

The overarching storyline that uses these metaphors, portraits or strands to tell its story really has three parts:

Let us now examine the fourth strand that Isaiah uses to tell his story.

This strand deals with the actual events taking place during Isaiah's ministry and highlights the history and faith of the Jewish people. 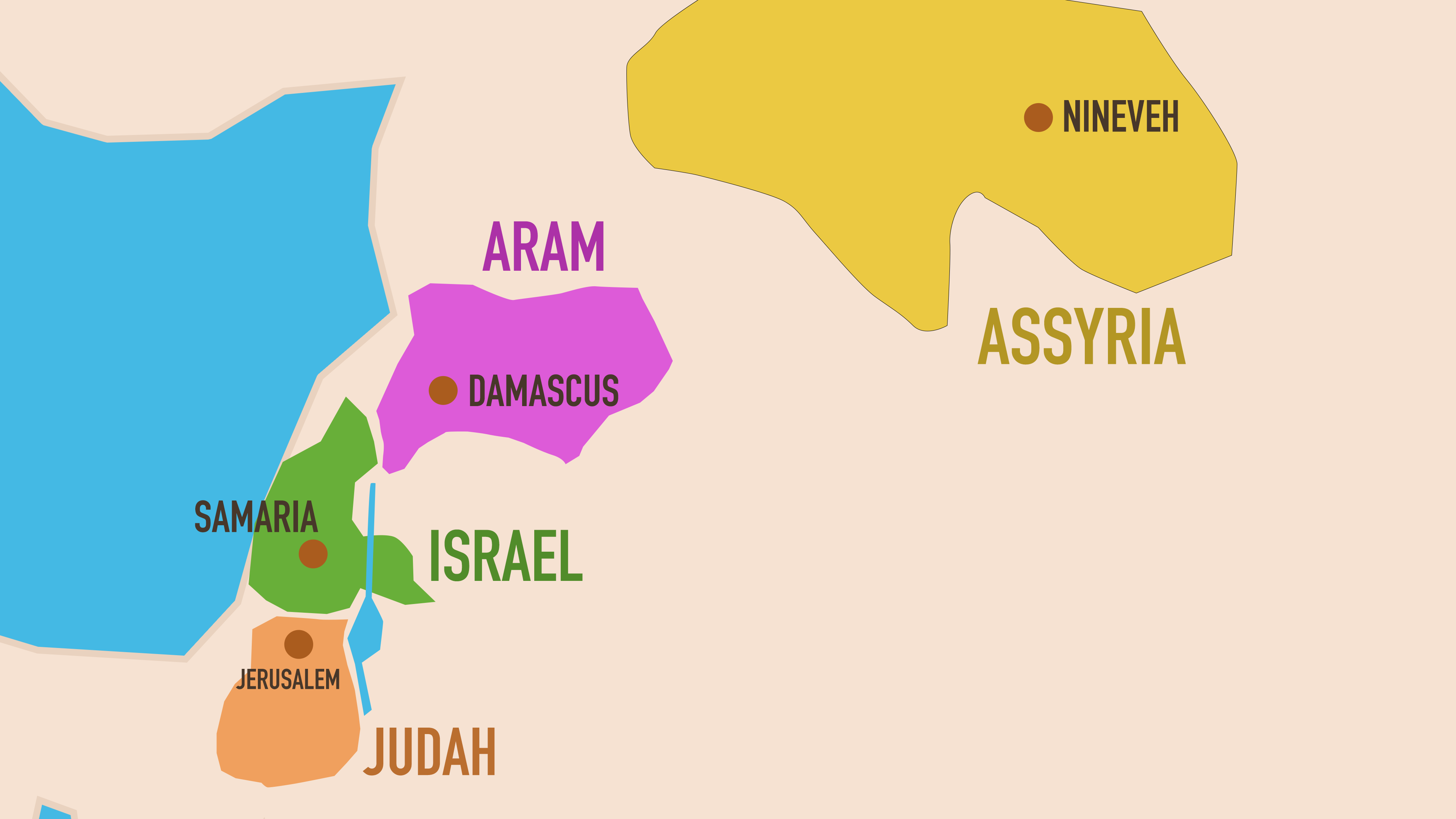 Isaiah prophesied during the reigns of four kings:

Isaiah served at a time when the threats to two kings, Ahaz and Hezekiah, came from these two world powers.

1Now it came about in the days of Ahaz, the son of Jotham, the son of Uzziah, king of Judah, that Rezin the king of Aram and Pekah the son of Remaliah, king of Israel, went up to Jerusalem to wage war against it, but could not conquer it. 2When it was reported to the house of David, saying, "The Arameans have camped in Ephraim," his heart and the hearts of his people shook as the trees of the forest shake with the wind.

3Then the Lord said to Isaiah, "Go out now to meet Ahaz, you and your son Shear-jashub, at the end of the conduit of the upper pool, on the highway to the fuller's field, 4and say to him, 'Take care and be calm, have no fear and do not be fainthearted because of these two stubs of smoldering firebrands, on account of the fierce anger of Rezin and Aram and the son of Remaliah. 5Because Aram, with Ephraim and the son of Remaliah, has planned evil against you, saying, 6"Let us go up against Judah and terrorize it, and make for ourselves a breach in its walls and set up the son of Tabeel as king in the midst of it," 7thus says the Lord God: "It shall not stand nor shall it come to pass. 8For the head of Aram is Damascus and the head of Damascus is Rezin (now within another 65 years Ephraim will be shattered, so that it is no longer a people), 9and the head of Ephraim is Samaria and the head of Samaria is the son of Remaliah. If you will not believe, you surely shall not last."'"
- Isaiah 7:1-9

The nations to the immediate north of Judah (Israel/Ephraim and Aram) were united in order to protect themselves against their own northern threat, Assyria. These two (Israel and Aram) tried to invade and overtake Judah but failed to do so. A second invasion by the same powers was tried but this time the goal was to conquer the people and depose of the King (Ahaz) and replace him with another (non-Davidic) King (Son of Tabeel - vs. 6) thus creating a three-nation block to defend against Assyrian expansionism.

The true threat here was the notion of ending the divinely appointed lineage of Kings from David's family through military means. It is at this point that Isaiah brings a message from God to Ahaz the Jewish King on David's throne.

In short, the message is to do nothing and wait on God and decide:

We learn that Ahaz chose to make an alliance with Assyria. In an exchange for submission to Assyria, he gave up the freedom and independence/sovereignty of his throne to gain Assyria's protection from Judah's immediate northern enemies, Israel and Aram. Ahaz does this despite Isaiah's prophecy that God would destroy both of these northern threats in the near future.

We learn that the two northern powers fell just as Isaiah had prophesied to Ahaz.

The Assyrian empire was now a major and immediate threat, and Egypt to the south wanted to form a military alliance with Judah (Southern Kingdom) in order to defend against their mutual enemy to the north, Assyria. Isaiah counseled Hezekiah, the king at that time, against forming such an alliance since Judah's defender was God, not a human power (Egypt).

Assyria, led by Sennacherib, eventually attacked Judah once it declared its independence and easily crushed the effort that Egypt made to come to Judah's defense. Hezekiah surrendered and asked for terms of peace with Assyria and in response was forced to pay a huge tribute in exchange for the cessation of war.

However, once the payment was made the Assyrians treacherously violated the condition of the surrender treaty and attacked Jerusalem anyways. Hezekiah belatedly accepted Isaiah's inspired counsel to trust in God for his safety and survival. We read that the city was saved and the Assyrians returned north and both their empire and power began to decline, and eventually were defeated by the Babylonians in 612 BC (Isaiah 37:36-38).

Isaiah emphasizes the central theme of this fourth as well as every other of the five strands of thought that makes up his book - faith, a faith that persists, prays and waits in hope.

22"For just as the new heavens and the new earth
Which I make will endure before Me," declares the Lord,
"So your offspring and your name will endure.
23"And it shall be from new moon to new moon
And from sabbath to sabbath,
All mankind will come to bow down before Me," says the Lord.
- Isaiah 66:22-23

In our next chapter, we will cover the fifth and final strand - literary structures and features. A better understanding of the literary devices that Isaiah uses will help the reader accurately discern the Prophet's message.