Class by:
Mike Mazzalongo
Paul continues to describe the basis for the universal condemnation of mankind.
Romans 2:1-3:12
July, 2016
38:25
8 minute read 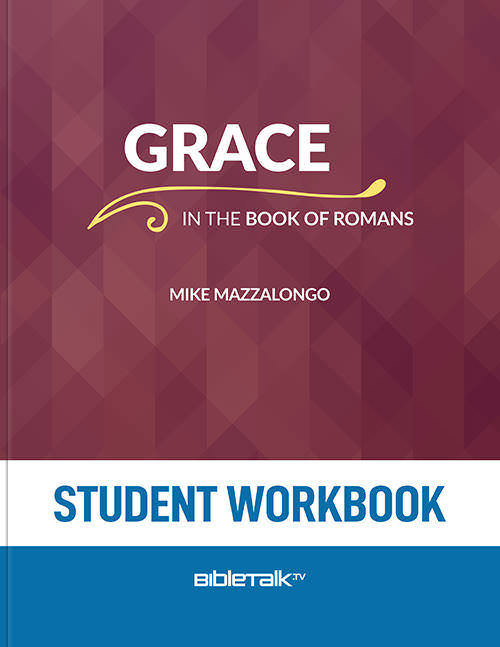 So far in our study I have said that God's original expression of grace was the creation itself and man's position at the head of it, his participation in the divine nature and intimate contact with God.

The initial fall from grace came when man disobeyed God and in doing so, undermined his position at the head of creation and rendered himself unable to know God intimately.

In chapter 1 of his epistle, Paul describes the process of this fall from a macrocosmic view throughout history:

In response to this we noted that God's renewed expressions of grace (interventions) throughout history always centered around the promise of Christ to come. From the garden to the cross it was the hope of His first coming that prophets continually stirred the people with. From the cross until the end of the world it is the promise of His return that the church revives men's hearts with when sinfulness threatens to overwhelm the moral order.

In the first chapter of Romans, Paul talked about man's moral failure and the things that this led him to. In chapters 2 and 3 he will describe God's judgment and how it will be rendered to all men.

In chapter 2 Paul summarizes the outworking of God's law which basically decrees that He will judge every single person that ever lived. For the purpose of judgment, the world is divided into two parts: the Jews (all the legitimate descendants of Abraham), and the Gentiles/Greeks (everyone else, not just those from Greece).

God's judgment is described in verses 5-16.

5But because of your stubbornness and unrepentant heart you are storing up wrath for yourself in the day of wrath and revelation of the righteous judgment of God, 6who will render to each person according to his deeds: 7to those who by perseverance in doing good seek for glory and honor and immortality, eternal life;

Everyone who pursues good according to God's standard of what is good (the law is what determines this), and does so in the understanding that they seek life with God (honor, glory, immortality), will have eternal life/be saved. Note that this is not a life according to what we think is good, but one lived according to what God thinks is good and doing this consciously. Both Jews and Gentiles who succeed at this will be saved.

8but to those who are selfishly ambitious and do not obey the truth, but obey unrighteousness, wrath and indignation.

Those who do not obey the truth (remember, God is the one who determines truth), who follow their own way, they will be subject to God's exercise of angry punishment.

God will judge every man according to this principle. Those who seek and obey His truth will be blessed and those who do not will be cursed. All will be judged alike, both Jews and Gentiles.

Gentiles who have not received the Law of Moses are still responsible to the "principle of law" which exists in their conscience and in nature which clearly reveals God's presence and demands. This principle does not articulate and reveal God as clearly as the Jewish Law does, but it does place moral and ethical demands on man nonetheless. For example, even without the revealed Law we know intuitively that killing our parents is not right.

Jews are clearly under the Law of Moses and will be judged according to this Law, which does not contradict the principle of law but merely amplifies it.

Paul explains that the judgment is based not on the sophistication and clarity of the rule we have (principle of law or revealed law), but rather how we respond to what we have.

14For when Gentiles who do not have the Law do instinctively the things of the Law, these, not having the Law, are a law to themselves, 15in that they show the work of the Law written in their hearts, their conscience bearing witness and their thoughts alternately accusing or else defending them, 16on the day when, according to my gospel, God will judge the secrets of men through Christ Jesus.

Here Paul explains how and why Gentiles are subject to both salvation and condemnation by demonstrating that what saves them or condemns them is their response to the principle of law (directed through conscience and nature) under which they live. He says that when they obey their law, they are righteous just as when the Jews obey the Mosaic Law they are righteous.

17But if you bear the name "Jew" and rely upon the Law and boast in God, 18and know His will and approve the things that are essential, being instructed out of the Law, 19and are confident that you yourself are a guide to the blind, a light to those who are in darkness, 20a corrector of the foolish, a teacher of the immature, having in the Law the embodiment of knowledge and of the truth, 21you, therefore, who teach another, do you not teach yourself? You who preach that one shall not steal, do you steal? 22You who say that one should not commit adultery, do you commit adultery? You who abhor idols, do you rob temples? 23You who boast in the Law, through your breaking the Law, do you dishonor God? 24For "the name of God is blasphemed among the Gentiles because of you," just as it is written.
25For indeed circumcision is of value if you practice the Law; but if you are a transgressor of the Law, your circumcision has become uncircumcision. 26So if the uncircumcised man keeps the requirements of the Law, will not his uncircumcision be regarded as circumcision? 27And he who is physically uncircumcised, if he keeps the Law, will he not judge you who though having the letter of the Law and circumcision are a transgressor of the Law? 28For he is not a Jew who is one outwardly, nor is circumcision that which is outward in the flesh. 29But he is a Jew who is one inwardly; and circumcision is that which is of the heart, by the Spirit, not by the letter; and his praise is not from men, but from God.

In the final verses he explains that the things that make a person pleasing to God are not the externals of a religion or the level of religious sophistication that one aspires to (Jewish Law revealed God more exactly than the mere principle of law) but how one responded to the law under which he lived.

In chapter 3 Paul describes how well the Jews and the Gentiles have responded to the systems of law they were subject to.

Paul begins chapter 3 by explaining that although the Jews had a true advantage because of the greater clarity of God's will in the Law of Moses (and it was meant to be an advantage), the Jews did not respond to it with righteousness. Their advantage only produced a demonstration of God's goodness, nothing more.

Some were saying (historically recorded) that if God was glorified by the revelation of the Law and His dealing with disobedient Jews, then why did He condemn them? After all, He was being glorified (got what he wanted) was He not? Paul responds that this kind of thinking says that evil glorifies God somehow and for this reason can be justified. The Apostle tells those who are warped enough to think this way that they deserve condemnation because they accuse God of using evil means to obtain a righteous end.

In verses 9-18 he summarizes the universal condemnation due to all men; one that was spoken of in the Old Testament and renewed in the New by Paul.

9What then? Are we better than they? Not at all; for we have already charged that both Jews and Greeks are all under sin;

Both groups have failed to live up to the principle of law under which they lived and so are condemned. Condemned, not because they, the Gentiles, did not become Jews or did not know about Christ, but because of the sins they committed. God does not condemn us because of what we do not know or do not do, but rather for what we actually do.

The Holy Spirit, using the words of David (Psalms 14:1-3) penned centuries before, declares that God, knowing every heart, judges that none seek Him, none desire honor, goodness and eternal life. No matter what the outside looks like, God tells us that He sees the condition of the heart.

According to this passage no one is excused or saved through ignorance, why? Everyone can know God through the witness of conscience and nature (Romans 1:19). The one who claims ignorance is simply a person who did not respond to the principle of law under which he lived (Romans 2:23). God assures us that He has examined every heart and none were seeking for Him (Romans 3:10-12). We do not have to judge, God has already done so and recorded the results for us to see.

But someone might say, "What if someone did? What then?"

And without faith it is impossible to please Him, for he who comes to God must believe that He is and that He is a rewarder of those who seek Him.
- Hebrew 11:6

Those who respond to God in conscience, nature or law will be found by Him. From Seth to the Patriarchs to the Nation of Israel and now the church, God has always had His people as a light to draw to Him those who searched for Him. In any age or any place, if someone looks for God, God will find them. He is not blind or weak.

All men have renounced grace and are caught in a cycle of theological, philosophical and moral failure from generation to generation.All, from Adam until the end of the world, are condemned. There is no one that escapes condemnation because of:

The conclusion is that all have renounced God's initial expression of grace and stand condemned for it. Unless we understand and accept the universality of condemnation:

In the next few chapters Paul will explain God's response to universal condemnation, a renewed expression of grace through Jesus Christ.

romans 2romans 3
Help keep our materials free and allow us to produce more biblical content.
Support this Ministry
Want to be notified whenever new material is added?
Subscribe by Email
Mike, it's past 1 am but I've got to thank you for your videos, especially the grace series. I'm learning so much from simple yet concise delivery. I've just passed your video onto an unbeliever who's in a bit of spiritual trouble and it's reaching him. Thank you, thank you, thank you. I'm gonna get back to the videos now, come to London :)