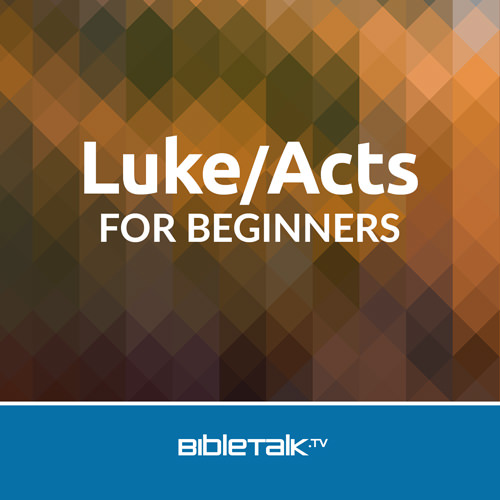 This series will review Luke's two-volume historical narrative concerning Jesus' life and ministry as well as the beginning and spread of Christianity in the Roman Empire as he experienced it.

26 Episodes
Platforms:
Apple Podcasts Spotify Amazon Music Stitcher Pandora Google RSS Feed
1. Introduction to Luke/Acts
Mike begins with a critical review of all four gospels in order to prepare for a focused study of the Book of Luke.
2. The Beginning
This lesson reviews the section in Luke that provides information on John the Baptist, Jesus' early life and the beginning of His ministry in Galilee.
3. Jesus in Galilee
Luke describes the many miracles and teaching sessions by Jesus performed in and around his home town and neighboring area.
4. Jesus in Galilee
This section continues the description of the rise of Jesus' ministry with amazing miracles and includes the Lord's commendation of John the Baptist and his work now completed.
5. Jesus in Galilee
In this final part of Jesus' ministry in Galilee, Luke continues to describe Jesus' miracles but adds a section explaining how He prepared and sent out disciples on their first missionary journey.
6. Jesus Facing Jerusalem
Luke turns his attention to Jesus' preparation for His journey south to Jerusalem and the opposition that awaits Him there.
7. Jesus Facing Jerusalem
Now that Jesus approaches Jerusalem, He is met with stiff opposition from the Pharisees and Priests who question both His teachings and legitimacy to teach.
8. Jesus Facing Jerusalem
In this section, Jesus relays several parables in response to those who questioned His authority and mission, and as a way of teaching His disciples on the unseen reality of the Kingdom of God.
9. Jesus Facing Jerusalem
Jesus heals 10 lepers and makes a prophecy concerning the coming judgment on the city of Jerusalem for having rejected its divine Messiah.
10. Jesus Enters Jerusalem
Luke describes three key events during Jesus' time in the city of Jerusalem: Prophecy concerning His death and resurrection; healing of a blind man; His triumphal entry into the city riding a donkey.
11. Jesus Enters Jerusalem
Here Jesus confronts and rebukes the religious leaders (who should have been first to recognize and accept Him) for rejecting Him and blocking people from going to Him.
12. The Consummation
The first of a two-part lesson describing the early events leading to Jesus' death on the cross.
13. The Consummation
Luke describes the final scene of Jesus' death and burial as well as the glorious aftermath of His resurrection on the 3rd day following His crucifixion.
14. The Ministry of Peter
In the first lesson of Acts, Mike explains the difference between the empowering and the indwelling of the Holy Spirit. The class will also review the events surrounding the day of Pentecost and begin to follow the ministry of Peter the Apostle.
15. Peter's Post Pentecost Ministry
The amazing success of Peter's Pentecost sermon is quickly followed by another miracle, a subsequent arrest and Peter's defense of the Gospel.
16. Persecution of Peter and Apostles
Luke describes the amazing case of Ananias and Sapphira's sudden death and the continued persecution of the Apostles by the Jewish leadership.
17. Persecution of the Church
Luke describes the events taking place and the people who were part of the first congregation of the church in Jerusalem.
18. Persecution of the Church
Luke continues to describe the events taking place and the people who were part of the first congregation of the church in Jerusalem.
19. Peter Preaches to the Gentiles
In this lesson, Luke describes the important breakthrough for the early church as Peter begins to proclaim the gospel to non-Jews for the first time.
20. The Ministry of Paul
Mike traces out the beginning and completion of Paul's first missionary journey with the many interesting and challenging stops along the way.
21. Paul's Second Missionary Journey
Mike continues the section describing Paul's second missionary journey and an important meeting at the church in Jerusalem to decide the future of Paul's work among the Gentiles.
22. Paul's Third Missionary Journey
Luke describes Paul's final journey as a free man working primarily in Ephesus establishing the church that would eventually spread the gospel throughout Asia Minor.
23. Paul's Arrest and Imprisonment
Paul returns to Jerusalem where he is arrested and a long period of confinement in various locations begins.
24. Paul's Arrest and Imprisonment
In this lesson, Luke describes Paul's appearances before Roman governors Felix and Festus and the outcome of those hearings.
25. Paul's Arrest and Imprisonment
Luke describes Paul's hearing before a third Roman official, Agrippa, and his subsequent appeal to be judged at the Imperial Court in Rome by Caesar himself.
26. Paul's Journey to Rome
Luke's excellent historical and nautical record of Paul's voyage to Rome and final scene preaching and teaching while awaiting trial.
Help keep our materials free and allow us to produce more biblical content.
Support this Ministry
Want to be notified whenever new material is added?
Subscribe by Email
You made my day! Getting 3 sets of DVDs ready to send to Ghana.