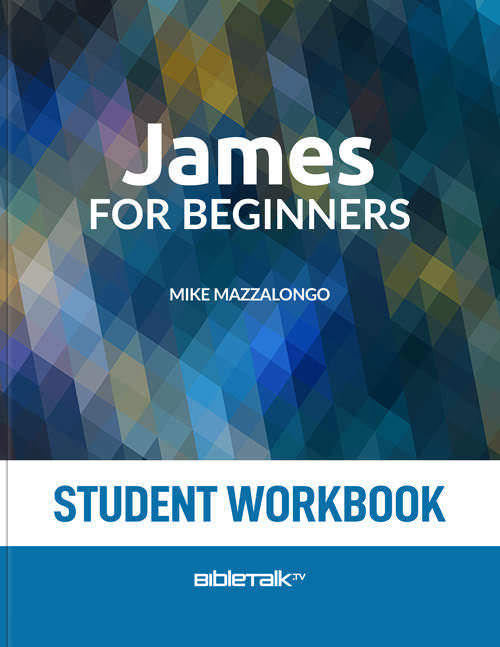 In Michael Jackson's 1991 album, Dangerous, he sings a song entitled Black or White. In it he repeats the words, "It doesn't matter if you're black or white," promoting the idea that he did not want to judge or be judged based on skin color. These lyrics capture the spirit of what James is saying in the section of his epistle which we will be looking at in this chapter: in the church it does not matter if you are black or white, rich or poor, man or woman, Jew or Gentile, we treat everyone in the same way.

A good example of how people tend to judge others by external things appeared on an old TV show called Candid Camera. It was broadcast in the 1960's/70's and was hosted by Allen Funt. He was the first person to use a hidden camera in order to record people involved in humorous situations set up by the show. In an early segment they dressed one of the program's producers to look like a homeless panhandler who was simply trying to get a match to light his cigarette. The video showed that most of the people that he approached did not stop, avoided eye contact and walked around him to continue on their way.

This same man then cleaned up, put on a business suit and went back to the identical spot trying to get someone to light his cigarette. Not only did people stop and give him a light or their matches, some gave him a cigarette as well. One passer-by even gave him his entire package of smokes. Of course, attitudes about smoking are different today, but the point made was that society usually judges by appearances and treats people accordingly.

My brethren, do not hold your faith in our glorious Lord Jesus Christ with an attitude of personal favoritism.
- James 2:1

The command: do not regard some as more important than others.

2For if a man comes into your assembly with a gold ring and dressed in fine clothes, and there also comes in a poor man in dirty clothes, 3and you pay special attention to the one who is wearing the fine clothes, and say, "You sit here in a good place," and you say to the poor man, "You stand over there, or sit down by my footstool,"
- James 2:2-3

The example: one's attitude towards rich and poor in church. The example can refer to all types of differences including gender, culture, etc. James compares and judges attitude, not differences.

have you not made distinctions among yourselves, and become judges with evil motives?
- James 2:4

If you have a different attitude for different people, then this type of behavior is evil (an evil motive like pride or selfishness).

Listen, my beloved brethren: did not God choose the poor of this world to be rich in faith and heirs of the kingdom which He promised to those who love Him?
- James 2:5

God is not partial, He loves everyone and proves it in the way He has offered salvation and blessings to everyone, even to the poorest.

6But you have dishonored the poor man. Is it not the rich who oppress you and personally drag you into court? 7Do they not blaspheme the fair name by which you have been called?
- James 2:6-7

You are guilty of sin if you give honor to someone who dishonors God and refuse to honor someone who does honor God. For example, Christians who spend money on entertainers or sports figures who live godless lives and revel in public sin, but refuse to give a dime to help support the church's effort to assist the poor and the lost. Another example, Christians who love to be with other "successful" Christians but shy away from contact with brethren who are poor, have handicaps or other limitations.

If, however, you are fulfilling the royal law according to the Scripture, "You shall love your neighbor as yourself," you are doing well.
- James 2:8

James reminds his readers of God's primary command when referring to human relationships: a right and loving attitude towards all. This, he says, guides our attitude in every situation.

9But if you show partiality, you are committing sin and are convicted by the law as transgressors. 10For whoever keeps the whole law and yet stumbles in one point, he has become guilty of all. 11For He who said, "Do not commit adultery," also said, "Do not commit murder." Now if you do not commit adultery, but do commit murder, you have become a transgressor of the law. 12So speak and so act as those who are to be judged by the law of liberty. 13For judgment will be merciless to one who has shown no mercy; mercy triumphs over judgment.
- James 2:9-13

To consider one brother more worthy of our love than another who is poor or different is unmerciful. This attitude removes us from the Law of Freedom and mercy for ourselves and puts us back under the Law of Judgment. If this is the way that we judge (based on wealth or performance) then this is how God will judge us, based on our performance.

We should only have one attitude for all and in the next verses James explains what this attitude ought to be.

14What use is it, my brethren, if someone says he has faith but he has no works? Can that faith save him? 15If a brother or sister is without clothing and in need of daily food, 16and one of you says to them, "Go in peace, be warmed and be filled," and yet you do not give them what is necessary for their body, what use is that? 17Even so faith, if it has no works, is dead, being by itself.
- James 2:14-17

Here he repeats the idea expressed in the last chapter (true religion consists of mercy to the less privileged). Sincere faith, the kind acceptable to God and thus the kind that saves us, manifests itself in good deeds. If the faith we have produces no good deeds, it is a sign that our faith is dead, and a dead faith has no power to save us. It is very much like a dead car battery. You know that the car has a battery because you can touch it, feel its weight and see its connection to the car, but if it is dead it is useless since it will not power the car.

But someone may well say, "You have faith and I have works; show me your faith without the works, and I will show you my faith by my works."
- James 2:18

James answers an imaginary argument from a brother who might say, "I have faith." This brother displays all the knowledge he has about Christianity, his books, memory verses and the fact that he is a religious person. James responds, "You can show me your faith by explaining everything you know about Christ, but I will show you my faith by the good deeds that my faith provokes me to do in the name of Christ."

You believe that God is one. You do well; the demons also believe, and shudder.
- James 2:19

But are you willing to recognize, you foolish fellow, that faith without works is useless?
- James 2:20

Saving faith does not simply understand the doctrines of Christianity, it obeys the teachings of the Christian religion. Yes, we are saved by faith, but saving faith is authenticated by the good works that accompany it. This is why James says that faith without works is dead (dead in the sense that it has no power to save us).

In verses 21-25 James gives two examples of Old Testament characters whose faith was demonstrated to be sincere by their works, and as a result, received the promise originally made to their faith by God.

21Was not Abraham our father justified by works when he offered up Isaac his son on the altar? 22You see that faith was working with his works, and as a result of the works, faith was perfected; 23and the Scripture was fulfilled which says, "And Abraham believed God, and it was reckoned to him as righteousness," and he was called the friend of God. 24You see that a man is justified by works and not by faith alone.
- James 2:21-24

Abraham: God promised this patriarch that the foreign land where he lived would eventually belong to his many descendants. Abraham believed God's promise and because of this the Lord considered him to be acceptable in His sight. Abraham's original faith was manifested throughout his life in many ways but most especially when God asked him to sacrifice his favored son, Isaac. Abraham's faith was true because it produced good works. He did not have perfect obedience, only Jesus had this (I Peter 2:22), but he did have a willingness, desire and pattern of obedience over his lifetime.

Good works perfect (bring to fruition) faith. The only way faith becomes visible and tangible is through good works. We know faith is perfected when sin is being abandoned and good works are done. This is how good works make faith complete, they render our faith visible and useful to God.

In the same way, was not Rahab the harlot also justified by works when she received the messengers and sent them out by another way?
- James 2:25

Rehab, the prostitute who had faith (no distinction with God), lived in Jericho and risked her life in order to hide Joshua's men who spied out the city before Joshua's capture of it. Both Rehab and Abraham were found to be acceptable before God because of their faith, and their faith was acceptable before the Lord because it was fruitful. In the end, both received the promises made to them.

For just as the body without the spirit is dead, so also faith without works is dead.
- James 2:26

Here, James describes a final image to underline his point. A body without breath (same word for spirit in the Greek) is a sign that the body is dead. In the same way, a faith without good works is a sign that this faith is dead, and therefore useless. Many people in this world have faith but their faith is useless because it does not produce any good deeds.

If one's faith is alive he will be active in good works, especially works of kindness and mercy towards his brethren. He will treat them in the way that God treats him. When we realize how badly we must seem before God, who sees all, it should move us to never again make distinctions between others. If our faith does not produce obedience to God, mercy towards our brethren, and a witness concerning the Lord and the gospel to the world, then it is a dead faith and will not save us in the end.

The best way to test your faith (alive or dead) is to take the "say and do" test (does what you say match what you do?).

Reading Assignment:  James 3:1-8
Help keep our materials free and allow us to produce more biblical content.
Support this Ministry
Want to be notified whenever new material is added?
Subscribe by Email
We have used BibleTalk.tv in small group studies and found them effective.