Series » I, II & III John for Beginners
1 of 6
Bookmark Print

Introduction to I John

Class by:
Mike Mazzalongo
Mike begins this study by listing 10 facts about the Apostle John and the heresy that prompted his writing of this epistle.
May, 2018
37:24
6 minute read 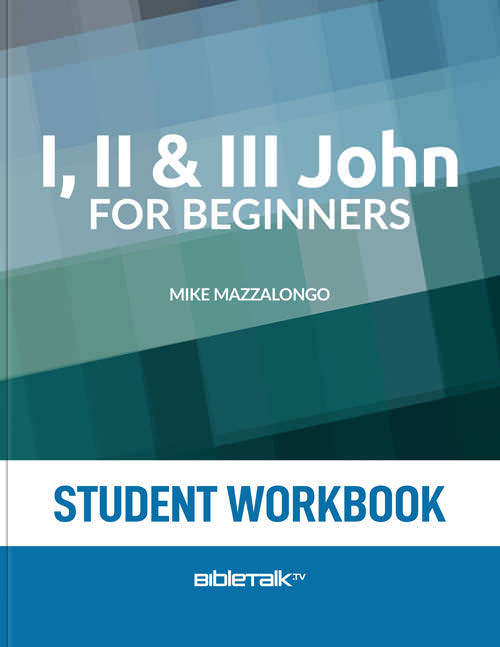 This study will be examining the three epistles written by the Apostle John, who also wrote the Gospel of John and the book of Revelation. Some think that these letters do not have the weight of other more lengthy epistles, but what they lack in length, they make up in substance. John's letters are a tremendous source of apologetic material (defense of the faith) as well as information about true Christian living.

Let us begin by briefly examining the life of their author, the Apostle John.

We have a lot of information about John, the writer of these epistles, from different parts of the Bible and other historical sources. Here are 10 facts that summarize John's life and work:

Background on the Epistle - I John

In simple terms, Gnosticism taught that "spirit" was good and "matter" was evil. Salvation, therefore, required one to escape the realm of matter (what was physical) and enter into the realm of spirit. These ideas were connected to the Greek concept of "duality." The Gnostic teachers taught that the way to make this escape or transfer was through "knowledge" (what the word gnosis means). Not any knowledge however, but the special knowledge held in secret by these same Gnostic teachers.

The conflict with the gospel and this teaching came in the form of questions concerning Jesus' identity. The contradiction for the Gnostics was the idea that something good, someone of God, someone who was God, someone who was spirit, came in the form of matter/humanity. Gnostics taught that matter was evil and the way to escape was through either the practice of self-denial or the complete embrace of hedonism (self-gratification). The problem for these teachers was that Jesus, the divine Son of God, came in the form of flesh/matter, practicing neither extreme self-denial nor self-gratification. He was not a self-indulgent sinner, but neither was He an ascetic like John the Baptist.

The Gnostic teachers tried to resolve this problem (that a divine spirit inhabited a physical body - something they believed was impossible) by teaching that the spirit of Christ only entered Jesus at baptism and left Him before He died on the cross (thus the divine spirit was only visiting and not fully part of Jesus' essential being). Another way to realign the gospel with their Greek ideas was to say that Jesus was not really human, He only appeared to be human (thereby preserving the idea that spirit and matter were not compatible since Jesus was only Spirit and simply appeared to be physical). In other words, He was only a spirit appearing in the form of a man. By teaching this they were able to preserve their Greek idea of "dualism" while still acknowledging that Jesus was the Son of God. Their error lay in the fact that they denied the full humanity of Jesus in their description of His nature.

In Ephesus a man named Cerinthus was the leader of this movement and claimed to have special mystic experiences as well as exalted knowledge which could elevate his students. He taught that Jesus was Joseph's physical son and received God's Spirit at baptism but it left Him at the cross. In response to this John writes three epistles (letters) for a church that was facing new philosophies that were threatening to undermine its basic doctrines: that Christ was both fully God and man simultaneously. John's letters were meant to help the church maintain apostolic teaching against the perversion of the first (but not last) doctrinal threat.

The Letter - I John

The first epistle of John is keyed to his personal eyewitness experiences with the living, breathing Jesus, not a pure spirit or apparition. Like the Gospel of John, this letter emphasizes the reality of Jesus but in philosophical terms. John is fighting a false philosophical system that uses imagery and esoteric concepts to explain itself and convince others. He responds by presenting the case for Jesus, an actual living and divine being, in philosophical and conceptual terms (light/love). John takes these abstract ideas and presents them in a practical way so that his readers can fully grasp the concepts given to them by the real Jesus and apply these to their everyday lives. John is not only responding to the false teachers by setting forth correct ideas and teachings, he is also ministering to his flock with words of encouragement about and from their faith.

The heretics' effect on the church was to cause doubt about Jesus' existence as well as their own possibility of salvation through Jesus alone, without the secret knowledge promoted by the Gnostic teachers. These individuals simply wanted spiritual power over the souls of the saints. They were teaching both Christians, as well as those turning to Christ from paganism, that the way to true salvation lay in the path of the secret knowledge that only they possessed. This technique has been used throughout history by various false teachers who insist on adherence to a particular doctrine other than the gospel, or leader other than Christ Himself in order to be saved. We know, however, that the "doctrine" changes and the "leaders" come and go, but the method (a different gospel or a new leader with a vision or secret) is always the same.

John's first epistle emphasizes once and for all that we receive salvation through Jesus Christ alone, and we can be certain of it. After establishing that Jesus was both fully man and fully God, John goes on to explain the three ways that we can be certain of our salvation, and none of them have anything to do with secret knowledge or special teachers. Salvation is both available and attainable for all.

John's gospel tells the story of the transformative power of the cross. John's first epistle encourages his readers to continue believing that particular and freely accessed knowledge. There is no secret knowledge, the truth has been revealed once for all and for everyone to see, that Jesus is the Christ and that everlasting life is through Him and Him only. This knowledge transforms us from lost to saved, condemned to forgiven, sinners to saints, members of the kingdom of darkness to members of the kingdom of light, slave to free, empty to filled with the Holy Spirit, and temporal to eternal.

John's writings tell us that we will one day leave our fleshly body, but the departure will not be produced by secret knowledge. Our transfer to a glorious body will be accomplished through faith in Jesus Christ based on our knowledge of Him freely given to us through the gospel.

Reading Assignment:  I John 1:1-2:29
Help keep our materials free and allow us to produce more biblical content.
Support this Ministry
Want to be notified whenever new material is added?
Subscribe by Email
BibleTalk materials are well done and contain sound Bible Teaching. I encourage churches to become aware of this excellent service.