Series » Førbidden Topics
3 of 13
Print Save for later

The 4 Phases of Addiction

Class by:
Mike Mazzalongo
In this first of three sessions, Mike describes the biology and behavior of the individual who is in the process of becoming addicted to drugs of various kinds.
March, 2021
41:31
7 minute read
Watch
YouTube Vimeo Rumble
Download
Video (720p) Audio (.mp3) Slides Notes

In the next three chapters we will be dealing with addictions in general. In this chapter I want to examine addictions from a physical and psychological perspective.

In subsequent chapters we'll see what the Bible says about addictions, their consequences and how God helps us avoid them or deal with them if they take hold on us. Hopefully, this information will give us both insight and warning about the power that various substances have to control and destroy our lives.

In the last several years there has been a lot of research done on the causes and effects of various addictions on humans. Using modern MRI technology scientists are able to see the actual reaction that the brain has when it is stimulated by various effects (like music or visual images) as well as chemicals (i.e. illegal drugs). 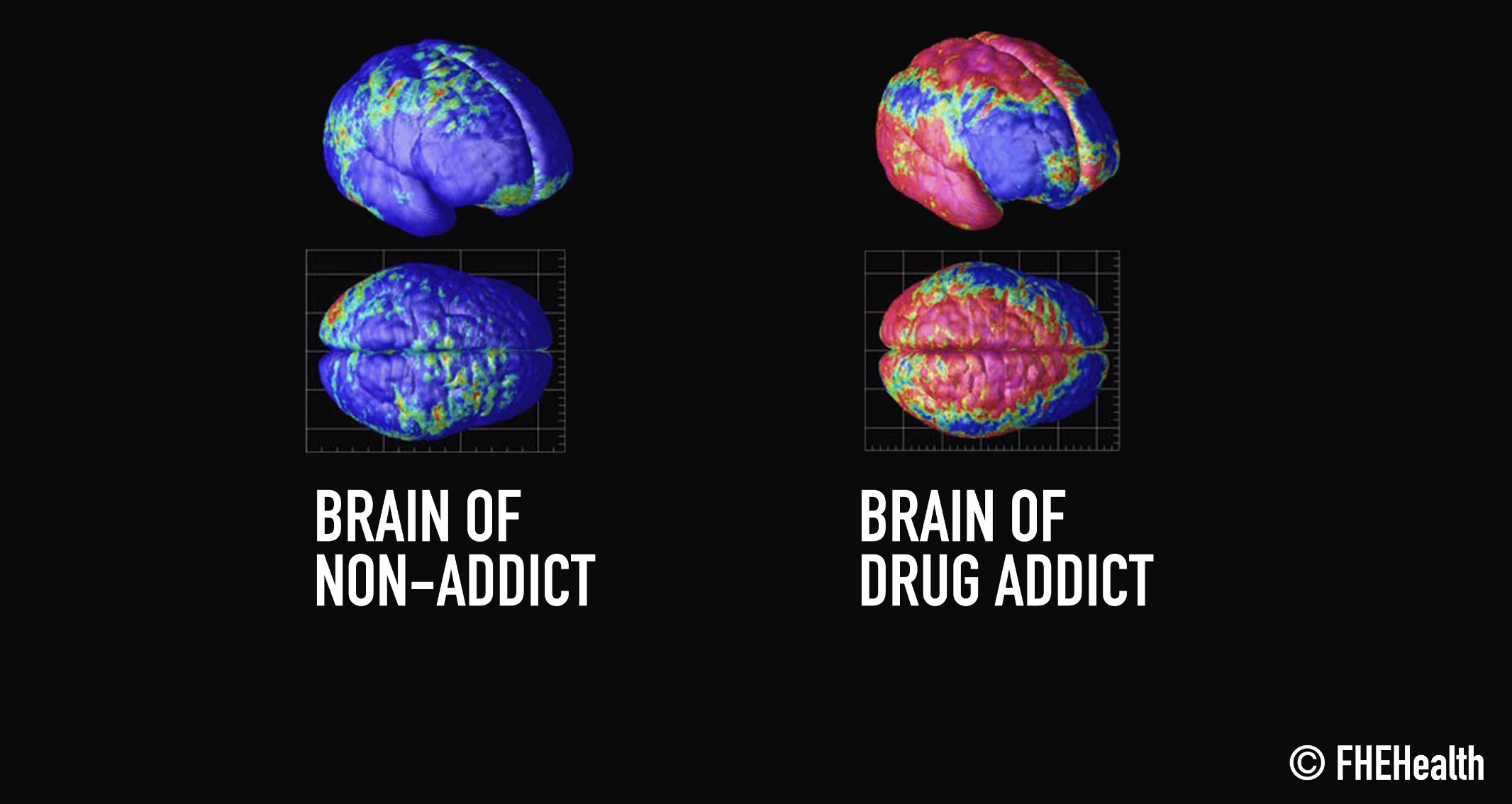 In this type of research scientists have identified neural circuits that are involved in the interaction of the brain with every known illicit drug and have specified common pathways that are affected by such substances.

This means that all illegal drugs have a similar effect on the brain that can actually be seen in an x-ray. You can put up the view of an MRI (x-ray) of a non-drug user's brain next to that of an addict and can easily tell the difference. Researchers are now able to indicate elements that are common to all addictions regardless of the substance used. This has led many scientists (including Dr. Alan Leshner, former Director of the National Drug Institute in the U.S.) to declare that "drug addiction is a brain disease."

From a Biblical perspective, we can expect that many things that are considered sinful such as immoral sex, drunkenness, pride etc. can easily evolve to a point where they incapacitate the body as illness. For example:

These few examples demonstrate that we have to be very careful when we label something as sinful.

In this first section, therefore, we will study addictions as diseases, and in the next we'll examine the pathways that often lead to addiction and what the Bible says about these.

How We Become Addicted

Part of the research on addiction is charting the common elements that lead to all addictions. Here are the four phases in the progression of addiction.

When it comes to addiction, learning is accomplished experientially, not intellectually. Addiction is learned instinctively, intuitively, spontaneously and naturally. And so, we become addicted to something using our instincts, intuition and natural feelings. The first phase in addiction, therefore, is that we "learn" certain things:

A. We learn that certain chemicals produce euphoria.

Euphoria is a "feeling" of some kind that changes our state of mind.

This is where the MRI's come in. They can track which part of the brain is being affected by the substance a person is taking and how the brain is reacting. In the MRI below, the dots represent the chemical THC found in cannabis products. We note that the THC is spreading to different parts of the brain affecting both sensory and motor skills. 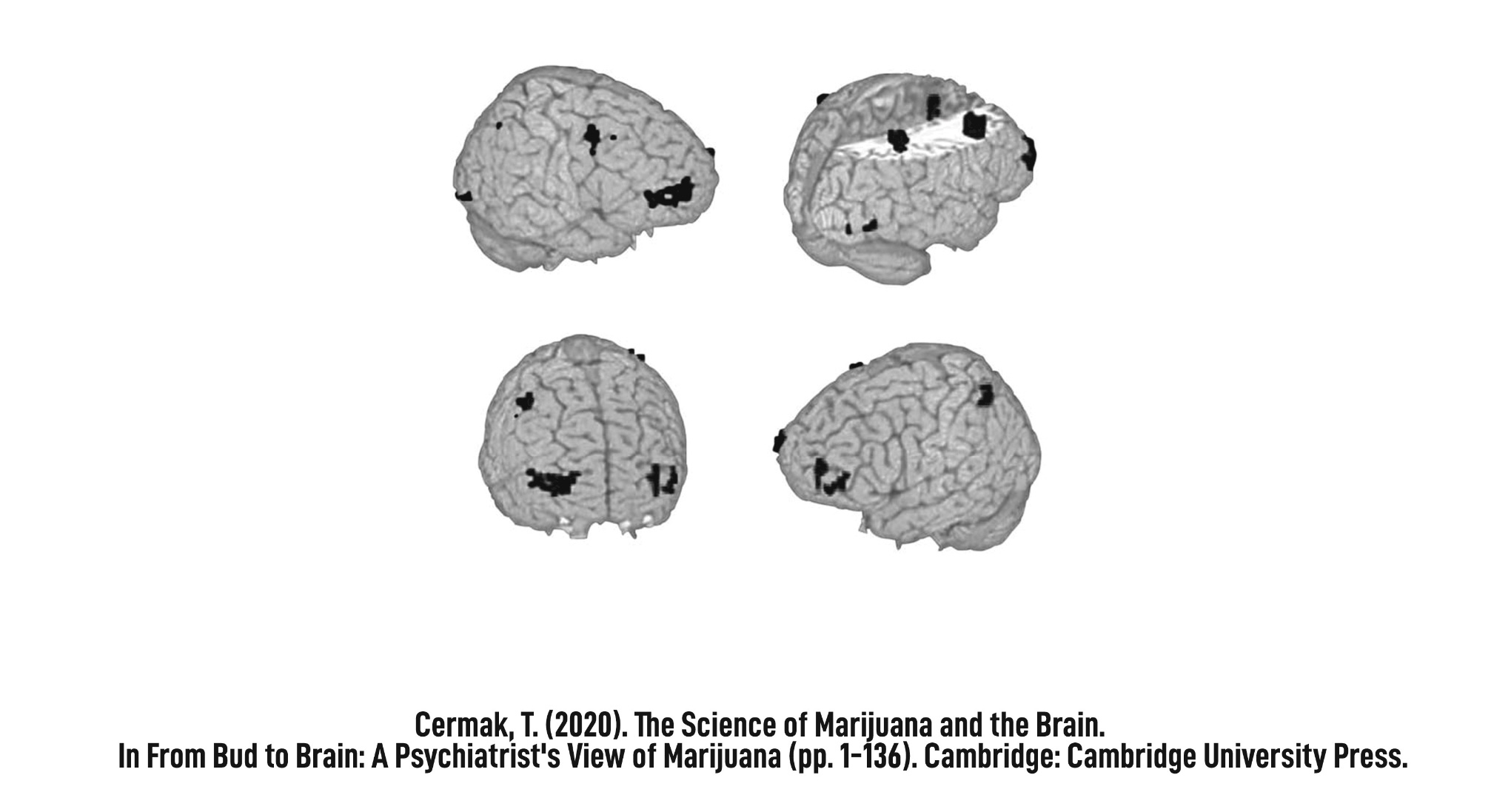 B. We learn that the degree of euphoria is determined by the quantity ingested.

We learn to trust chemicals and their effects because they work every time. It doesn't always happen the first time we try a substance but with repeated use we eventually "learn" (intuitively, naturally) this lesson.

This is what Phase #1 looks like on a chart.

The meds that you take when in legitimate pain do not become addictive if you stop using them when the pain stops. People become addicted to pain killers because when they return to "normal" they begin to use them to create euphoria instead of going from pain to normal. As long as the medication takes you from pain to normal you're not learning addiction – this is why you should take your pain medications regularly when sick or injured.

Once you've "learned" to trust chemicals to change your mood, you have moved to the second phase of addictions where you are now actively seeking the mood swing. This phase has its own progress:

This is Phase #2 on the chart. Note that it looks like #1 because it is reinforcing the lesson "learned" in Phase #1 – this "works" for me.

There's no time frame between Phase #2 and Phase #3. Events, our own character or the repetition of our consumption eventually lead to Phase #3. You know you're there because like Phase #1 and #2, Phase #3 has its own markers which include:

The chart for Phase #3 shows that the user has shifted his "normal" state from normal to pain. There is pain without chemicals so the pattern now begins at pain, moves to Euphoria and then back to pain not normalcy. There is pain and a high with a stop at normal. This is the point where you're losing your job, family and friends because of your dependency.

This is a chart for Phase #4. Note there is no euphoria, only pain and a false normalcy. According to research on the subject, addiction is the final step in a process where one "learns" to use various substances in order to affect the brain in altering one's perception of reality, or what is "normal."

People who are addicted change their activities and their personalities. For example, things like:

Discouraging as these traits may be, those who work with addicts and study their behavior say that many of these personality characteristics and activities are caused by a person's use of drugs. The good news is that these traits can be reversed with the withdrawal from chemical abuse.

This has been a brief introduction to the subject of addiction: What causes it; How it progresses; What effects it has on us. In the next chapter we will examine why people begin to abuse chemicals, what the Bible says about this issue and how to both avoid and recover from addiction.

addictionscopinghabitsaddictiondrugsalcohol
Help keep our materials free and allow us to produce more biblical content.
Support this Ministry
Want to be notified whenever new material is added?
Subscribe by Email
I thoroughly enjoyed the study of Genesis and learned so much that can be practically applied. I appreciate the effort and study that I can only imagine were required to complete the series.