Class by:
Mike Mazzalongo
The psalms that lift up God's name and providential care as protector and guide are referred to as assurance psalms.
June, 2017
41:30
7 minute read 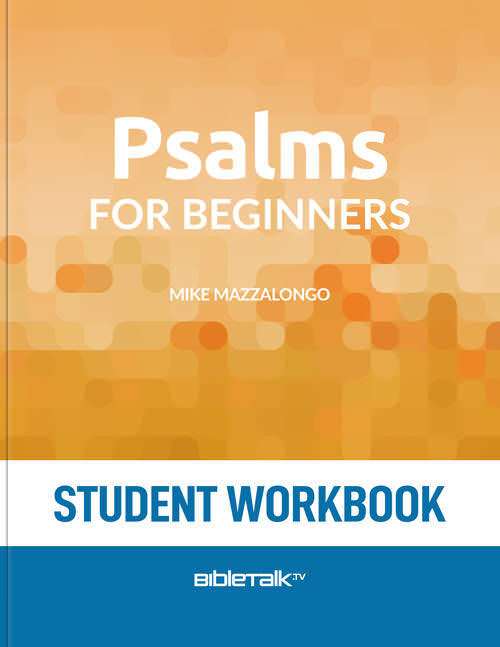 Many of the psalms and their categories describe the reaction that different people had when contemplating the experience produced by their relationship with God. For example:

In some instances the writers expressed their needs before God in times of difficulty and did so either through a listing of their troubles or by crying out for help (Suffering psalms). At other times they reflected on the sure presence of God during these moments and how He continually provided protection and guidance for His people.

The psalms that lift up God's name as protector and guide are called Assurance psalms.

Psalms 23 is a classic Assurance psalm and also the best known of all the psalms contained in the entire Bible. It is timeless in its beauty, and its message is easily understood regardless of culture or age. It describes the type of assurance one has from God and uses two images of Him in the same poem: one as a shepherd and one as host.

The picture of a shepherd was natural imagery for David to use since not only was he a shepherd but he came from a people who had been shepherds for many generations. Jacob, as well as his father, Isaac, and grandfather, Abraham, were all shepherds and Jacob acknowledged this to the Egyptian Pharaoh when he and his family migrated there to join his son, Joseph (Genesis 47:3).

The shepherd's work was all encompassing since sheep were the most helpless of animals, unable to defend or care for themselves. Jewish shepherds were especially attentive in that they led their flocks by walking in front of them and did not "drive" them from the rear. They scouted grazing land for them, making sure that the grass was young and fresh, not dried up or filled with weeds and possible poison herbs. These shepherds brought them out in the morning, protected and watered them in the day, and led them back to the sheepfold at evening. Many slept in the doorway of the sheepfold to protect against nighttime intruders or theives. Good shepherds literally lived with their flocks.

1The Lord is my shepherd,
I shall not want.

David, the shepherd from a nation of shepherds, declares that God is his shepherd and by extension fulfills this protective role with the nation as well. The word "Lord" here is the term "Jehovah" or God. It suggests the quality of the shepherd in that He is eternal, all powerful and capable of complete care for His flock. The metaphor of a shepherd as protector was a common one in those times. David states confidently that with the Lord as his shepherd, he will not be left wanting. His needs and the needs of all the flock will always be met by this great shepherd.

2He makes me lie down in green pastures;
He leads me beside quiet waters.
3He restores my soul;
He guides me in the paths of righteousness
For His name's sake.
4Even though I walk through the valley of the shadow of death,
I fear no evil, for You are with me;
Your rod and Your staff, they comfort me.

In the next few verses, David outlines some of the things that this great Shepherd does and will do for him.

These things He will do by guiding him in the right ways to think, believe and act.

God will provide protection through life's problems. The "shadow of death" is not death itself but rather the fear of death and signs of it we see in this fallen and sinful world. Even though I see these things and the shadow of death crosses over into my life, I will not fear because my shepherd will be there to protect and strengthen me.

The words "rod and staff" may be referring to the same thing but used in two ways (the literary device of metonymy - in this case substituting the words rod and staff for the single idea of God's "Word"). For example: the Word (rod) comforts with encouragement and assurance of God's love and mercy in the face of death; the Word (staff) also protects against false ideas and the attacks of the devil. This would have been easily recognizable to David's reading audience since the staff or rod used by shepherds had many uses. It served to direct the way the flock travelled, used to protect against other animals, functioned as a disciplinary tool punishing sheep who strayed and helped the shepherd keep count when the sheep were in their enclosure.

David sees God as his shepherd who provides, through His word, not only for his physical needs, but also guarantees peace of mind, salvation of his soul, protection against evil and support through life's difficult times.

David changes the imagery for God from protective shepherd to gracious host beginning in verse 5.

5You prepare a table before me in the presence of my enemies;
You have anointed my head with oil;
My cup overflows.

The generous hosts of that era, as they are today, were anxious to please their guests. They did not see hospitality as a burden but as a gracious act that blessed their guests as well as their own households. In those days, however, the host provided not only the food, but also washed his guest's feet and provided him with ointment as a sign of welcome. In addition to this, the host was also responsible for the protection of his guest (this responsibility lasted as long as the food remained in the body: two days). With God as his host, David is presented with a feast (cup overflowing) and blessings (anointing) despite his enemies and problems (when we count our blessings we usually see that they outnumber our problems).

6Surely goodness and lovingkindness will follow me all the days of my life,
And I will dwell in the house of the Lord forever.

With God as his shepherd and host, David is assured that:

Here is a psalm that sees God as our refuge. Some say this (not 18) is the inspiration for the hymn, A Mighty Fortress is Our God, written by Martin Luther.

This psalm is divided into three sections.

God is our refuge in life's gravest crises. The author describes cataclysmic natural events but says that despite these, one whose refuge is God will not be afraid.

4There is a river whose streams make glad the city of God,
The holy dwelling places of the Most High.
5God is in the midst of her, she will not be moved;
God will help her when morning dawns.
6The nations made an uproar, the kingdoms tottered;
He raised His voice, the earth melted.
7The Lord of hosts is with us;
The God of Jacob is our stronghold. Selah.

God is our refuge in the presence of our immediate enemies. He describes Jerusalem as not only the place where God dwells with His people but also the target for attack by the enemy. The defender of the city who destroys the enemy is God Himself. The idea here being that those who are close to God will be successfully defended by God against any and all enemies.

8Come, behold the works of the Lord,
Who has wrought desolations in the earth.
9He makes wars to cease to the end of the earth;
He breaks the bow and cuts the spear in two;
He burns the chariots with fire.
10"Cease striving and know that I am God;
I will be exalted among the nations, I will be exalted in the earth."
11The Lord of hosts is with us;
The God of Jacob is our stronghold. Selah.

God is our refuge among the nations. The author declares that not only does God protect from various enemies (political, moral, spiritual) but His victory serves as a sign to all the nations that they should cease rejecting God and His people, and come to the Lord. This psalm looks to a point beyond this world and into the next where the author sees God as the refuge against death itself. Note that verses 7 and 11 form a refrain which is repeated twice in the poem and refers to the threefold title of God.

Who is this refuge for us?

In describing God in this psalm, the author is assured that the Lord is a refuge against life's catastrophes, enemies and death. This assurance is based on the recognition of His divine power, the historical proof of His love and the promise to always be with His people.

Help keep our materials free and allow us to produce more biblical content.
Support this Ministry
Want to be notified whenever new material is added?
Subscribe by Email
I’ve grown up in a Christian home my whole life, but there have been times I have struggled with my faith. I started listening to your series, Getting to Know you God. I just wanted to say thank you for the work that you are doing. The four lessons I have listened to so far have really opened up my mind to a lot of things about God.