A Christian's Response to Death and Dying

Class by:
Mike Mazzalongo
In this session, Mike compares the five stages of grief originally taught by Elisabeth Kübler-Ross to the grieving process outlined in the Book of Job.
November, 2020
41:51
8 minute read 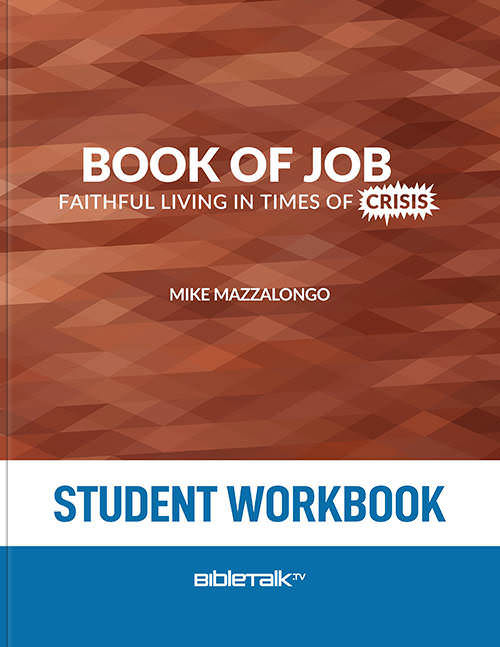 In 1969, Elisabeth Kübler-Ross wrote a groundbreaking book on the subject of death and dying. She noted a pattern of behavior that dying patients exhibited as they themselves approached death from terminal illness, or suffered the death of a loved one. Her five "stages" have become famous and often repeated in teaching people on how to cope with serious illness and death. In case you are not familiar with these, her five stages were:

She taught that people didn't necessarily go from one stage directly to the other, but rather went from one to another in a cyclical fashion. For example, the shock would be followed by anger and then depression and then a measure of acceptance after which one might revert back to bargaining with God for more time (in case of terminal illness). People went from one emotion to another for various amounts of time until, hopefully, they would remain in the acceptance mode for longer and longer periods of time. This became the primary model that explained a person's reaction to death and dying.

Kübler-Ross was not a Christian, and in later years saw herself as a sort of "medium" able to contact the spirit world. Much of her subsequent writings were not taken very seriously for this reason. I mention this about her because it confirms in my mind the fact that she did not use the Bible as a model for her death and dying theories. Had she used the Bible in developing her ideas she would have discovered a much more complete and satisfying response to death and dying by examining a believer's response to these traumatic events in life.

As a human being, a believer's response to his/her own terminal illness or the death of a loved one is the same as any other person's response. However, because of faith in God and trust in Christ, that response goes beyond the mere five steps that Kübler-Ross described.

Job's Response to Death and Dying

If we had to examine one person in the Bible who experienced both the threat of terminal illness and the death of loved ones simultaneously: it would be Job. We are familiar with Job's story:

Now, after all these things had happened to Job, we read that he did not respond like ordinary people do. He did not act like the people Kübler-Ross described in her book. He responded differently than most folks would in a similar situation. Most people after experiencing what Job experienced would go into denial and shock not wanting to accept the reality of the terrible things that had just taken place; or would try to put the events out of their minds as soon as the funeral was over telling themselves that, "Life must go on."

I'm always amazed at how quickly people begin to talk sports or light up a cigarette or gossip after a funeral service. No more than a minute passes after the final prayer at a graveside service and people are in a hurry to get back to "normal." It seems that we want to get the grieving over with as soon as possible. Many times those grieving want to blame God or question God concerning their tragedy. "Why now, why this, why me, why them?" they ask.

Believers, however, are not most people. Their way of dealing with death and dying is different because of the cross that is behind them, the Spirit that is within them and the future that is before them. An example of this is Job's response to the loss of his wealth, children and position, all in the same day. In the book of Job, chapter 1, we see the five steps that this believer went through in his experience of death and dying.

Then Job arose and tore his robe and shaved his head
- Job 1:20a

Job immediately begins to lament the loss of his children as well as the other good things he had enjoyed for so long. Note that he accepts as true the events that have befallen him. That he tears his robe, shaves his head and falls to the ground are natural human and culturally appropriate responses to these tragedies. What Job did was the normal and healthy way to deal with tragedy: lamenting and mourning.

In some cultures family members wear black for a year after the death of a close relative. This is a good way to separate oneself for a time of spiritual, emotional and social renewal. In effect, it says, "Don't mind me, I'm in mourning."

The worse detriment to recovery from a tragedy is to force a time limit for ourselves to "get over" our loss. If you don't weep and mourn when it happens, you'll weep and mourn later.

Many depressions and anxieties are the result of improper time and effort given over to mourning the loss of a loved one, marriage, health or family situation. Mourning was all Job could do at this point, and he did it as a way of saving his sanity.

and he fell to the ground and worshiped. He said,
"Naked I came from my mother's womb,
And naked I shall return there.
The Lord gave and the Lord has taken away.
Blessed be the name of the Lord."
- Job 1:20b-21

As a believer, once Job could struggle to right himself from the shock, his first thought was to go to God in worship and prayer. It is unfortunate that so many see prayer as a last hope or a grasping at straws when things go wrong. Instead of worship, tragedy leads many to:

Of course, the verse here in Job does not contain all that he said, doesn't repeat for us every prayer uttered; rather we are given the conclusion of his worship and talking to God. We read about the insight that he first gains as a result of that prayer.

Initial prayer and worship does not always produce such deep insights into the nature of our situation and such clarity about its meaning. However, when the thought of existing one more minute on this earth is too painful to bear - the only place we can and should go is to God in humble worship and prayer. If trouble, pain and death don't drive us to our knees, what will?

Grieving is like being strapped into a roller coaster where we feel powerless to affect anything happening to us or to our feelings. For this reason, we need to come closer to the one who does have the power to control all things - including death. This may not change the circumstances, but it does bring us peace and, at times, a certain understanding.

Job did this, and although his situation did not change, through his tears he was rewarded with a crystal clear understanding of the true nature of his life and its ultimate meaning and substance.

Although later on Job did break his silence, his first and correct impulse was to hold his peace, contemplate his situation and wait upon the Lord. The Bible explains this by saying that Job didn't complain to or blame God. He didn't charge God foolishly. He didn't question God as to the timing, the fairness or the degree of his suffering.

He didn't dwell on the "why" of it all with the suggestion that there may have been a better or easier way. He did not substitute a plan of his own for what had happened that might have lessened the blow. He said nothing concerning the events and how they took place. The Bible says that in doing this, he sinned not.

Kübler-Ross described the stages of grieving as denial, anger, bargaining, depression and acceptance. We've come to see these as the normal human progression and response to death and dying. We should also note that for a weak and sinful person these may be normal responses, however,

All of these are fleshly, worldly responses born out of our sinful and weak natures. The only spiritual reaction is the final stage: the one of acceptance.

Compare these, however, with Job's initial response to death and dying:

Eventually, he developed a life-threatening illness, lost the support of his wife and was condemned by his friends as a sinner who had brought all this misery upon himself. These additional burdens led Job to the last two steps in the believer's journey through the experience of grief and dying.

For nearly 40 chapters in an on-going dialogue with his friends, we watch Job as he comes to grips with not simply the reality and meaning of his suffering, but the truth that stands behind not only his suffering but the suffering of all men. Job learns that his experience is worth it if it reveals more perfectly the God he believes in. In other words, if your suffering serves to give you a glimpse of God Almighty, then it is a small matter and any complaining is foolish and sinful in comparison to what has been discovered along with what has been given to you.

Enlightenment, especially that enlightenment that enables us to see God more clearly is of more value than what we have lost - whatever that is, however we suffer.

Job learned that life, as well as death, are in God's hands and the painful experience of these is justified if it leads us face to face with God, even if it's for a moment. That one moment is worth all the suffering. The non-believer's best hope is to arrive at that point where he accepts reality and learns to cope with it. That reality being that people suffer and die and there is nothing he can do about it except carry on as best we can - this is as good as it gets!

Suffering and death for believers, however, bring them face to face with the ultimate reality that there is a living God who gives life and controls death by His power. The ultimate end, therefore, is that death and dying can serve to strengthen faith and hope, and consequently loosen the grip of fear and sorrow that these experiences have on our hearts. Only an enlightened person like Paul the Apostle could write these words when facing death,

Paul had seen beyond suffering and death and had a glimpse of God's reality, and this vision was worth all the suffering he had to endure.

In the last chapter, we learn that God heals Job and restores his family, wealth and position. This didn't change the fact that Job had suffered and lost children and prestige; his suffering was real. You see, God doesn't give us our old lives back; He gives us a new life. Here on earth, it is a life we can live and live with. Sometimes it is very different. Sometimes it is harder. But for believers, it is always a life where God is more prominent than before. In the end, He is the reward for persevering.

You may not have a parent, child, spouse, loved one or health anymore, but you now have more of Him to make up for it. And in the next world, the great promise for those who have experienced the enlightenment of suffering is that you will have all of Him all the time because after your death you will leave behind everything that comes between you and Him now.

dealing with deathhelp with dying family memberlossdepression
Help keep our materials free and allow us to produce more biblical content.
Support this Ministry
Want to be notified whenever new material is added?
Subscribe by Email
We have used BibleTalk.tv in small group studies and found them effective.