5. Your Attitude Toward God

1Guard your steps as you go to the house of God and draw near to listen rather than to offer the sacrifice of fools; for they do not know they are doing evil. 2Do not be hasty in word or impulsive in thought to bring up a matter in the presence of God. For God is in heaven and you are on the earth; therefore let your words be few. 3For the dream comes through much effort and the voice of a fool through many words.

4When you make a vow to God, do not be late in paying it; for He takes no delight in fools. Pay what you vow! 5It is better that you should not vow than that you should vow and not pay. 6Do not let your speech cause you to sin and do not say in the presence of the messenger of God that it was a mistake. Why should God be angry on account of your voice and destroy the work of your hands? 7For in many dreams and in many words there is emptiness. Rather, fear God.

8If you see oppression of the poor and denial of justice and righteousness in the province, do not be shocked at the sight; for one official watches over another official, and there are higher officials over them. 9After all, a king who cultivates the field is an advantage to the land.

The Folly of Riches

10He who loves money will not be satisfied with money, nor he who loves abundance with its income. This too is vanity. 11When good things increase, those who consume them increase. So what is the advantage to their owners except to look on? 12The sleep of the working man is pleasant, whether he eats little or much; but the full stomach of the rich man does not allow him to sleep.

13There is a grievous evil which I have seen under the sun: riches being hoarded by their owner to his hurt. 14When those riches were lost through a bad investment and he had fathered a son, then there was nothing to support him. 15As he had come naked from his mother’s womb, so will he return as he came. He will take nothing from the fruit of his labor that he can carry in his hand. 16This also is a grievous evil—exactly as a man is born, thus will he die. So what is the advantage to him who toils for the wind? 17Throughout his life he also eats in darkness with great vexation, sickness and anger.

18Here is what I have seen to be good and fitting: to eat, to drink and enjoy oneself in all one’s labor in which he toils under the sun during the few years of his life which God has given him; for this is his reward. 19Furthermore, as for every man to whom God has given riches and wealth, He has also empowered him to eat from them and to receive his reward and rejoice in his labor; this is the gift of God. 20For he will not often consider the years of his life, because God keeps him occupied with the gladness of his heart.

6. The Futility of Life

1There is an evil which I have seen under the sun and it is prevalent among men— 2a man to whom God has given riches and wealth and honor so that his soul lacks nothing of all that he desires; yet God has not empowered him to eat from them, for a foreigner enjoys them. This is vanity and a severe affliction. 3If a man fathers a hundred children and lives many years, however many they be, but his soul is not satisfied with good things and he does not even have a proper burial, then I say, “Better the miscarriage than he, 4for it comes in futility and goes into obscurity; and its name is covered in obscurity. 5It never sees the sun and it never knows anything; it is better off than he. 6Even if the other man lives a thousand years twice and does not enjoy good things—do not all go to one place?”

7All a man’s labor is for his mouth and yet the appetite is not satisfied. 8For what advantage does the wise man have over the fool? What advantage does the poor man have, knowing how to walk before the living? 9What the eyes see is better than what the soul desires. This too is futility and a striving after wind.

10Whatever exists has already been named, and it is known what man is; for he cannot dispute with him who is stronger than he is. 11For there are many words which increase futility. What then is the advantage to a man? 12For who knows what is good for a man during his lifetime, during the few years of his futile life? He will spend them like a shadow. For who can tell a man what will be after him under the sun? 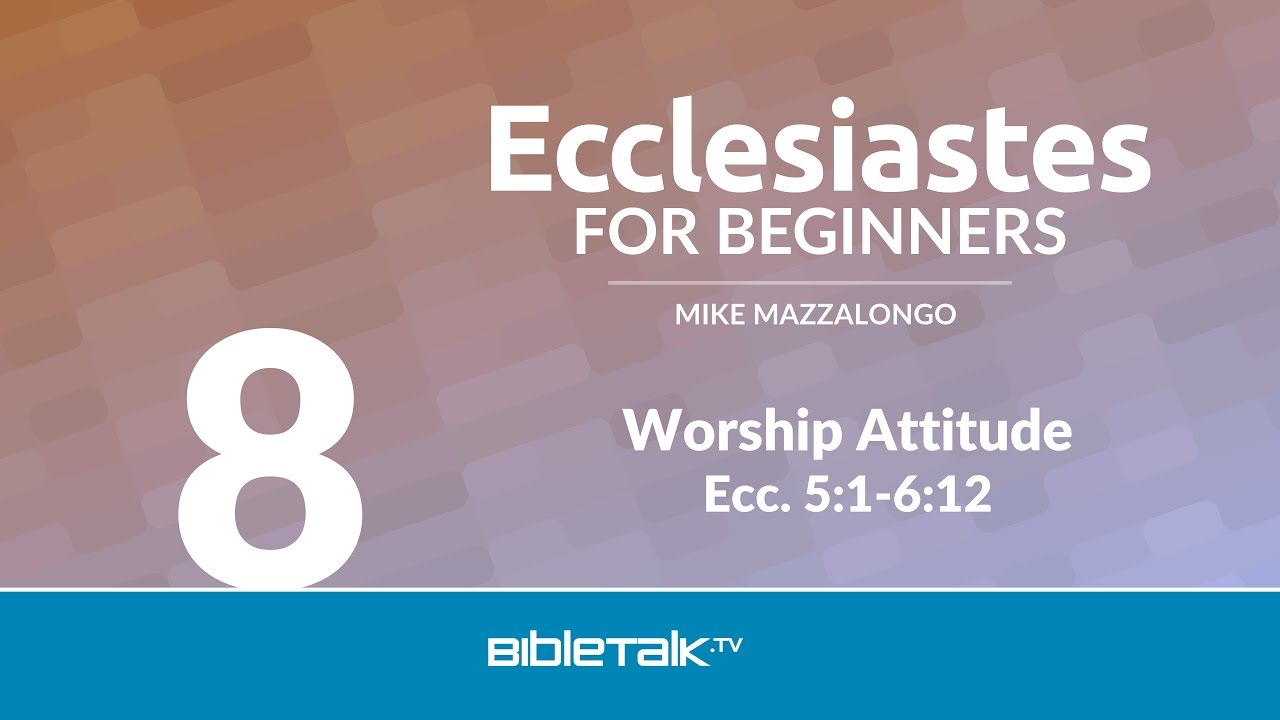 In chapter five there is an abrupt change as Solomon comments on the attitude necessary for proper worship and then goes on to talk about the enemy of spirituality - materialism. (Ecclesiastes 5:1-6:12)
Prime   37 min
Want to be notified whenever new material is added?
Subscribe by Email
Help us continue producing
more biblical content.
Support this Ministry
This is the only time I’ve listened to a sermon and absolutely ALL of the glory goes to God. You truly are learning more about our God and His word, not about a particular church or pastor. I listen everyday and plan to continue to do so. Thank you! Thank you!